My best friend, Judas, the train and the automobiles 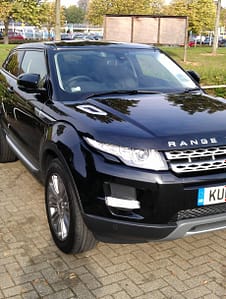 the Range Rover Evoque and my involvement in some of the original research that helped shape the car, its features, it’s marketing material and day experiences.

Some of the eagle eyed, non gold fish syndromed among you (such as my dear friend, Renee Owens) will have remembered that yesterday, was to be the culmination of years of waiting and months of talking, the moment when this writer would finally climb behind the wheel of  a FINAL  production model of the Range Rover Evoque and be ordered (okay, asked) to put the car through its paces by traversing perilous ravines (alright,  man made water baths), negotiating mountainous passes (yes, metal frame car ramps) and confront carnivorous beasts (otherwise known as Southampton traffic). Yes, you may scoff but  most of you won’t know what a zoo that place becomes when the Boat Show is on.

Well, nor do I for that matter because I may have started my day with hope and a good smidgen of trepidation that things were not going to go to plan  and, well, they didn’t;  my best friend decided to ditch me, our day, our Platinum VIP tickets and my dreams, two years or so in the making,  for reasons he  hasn’t yet managed to explain, nor do I think I’ll ever manage to comprehend.

Now, some of you who know me will not be surprised to learn that I did have a backup plan, should the friend factor fail me, it  was to catch a train to the Southampton Boat Show. However, for this to work, I’d need to know about Judas’ intentions sooner rather than later to allow ample time for the journey. Sadly, he twisted the knife by failing to answer my text messages in a timely manner which meant that I only made it to the train station in time to buy my car parking ticket and watch the 6:30 trundle in and out of the station as I helplessly and breathlessly looked on.

Cue that dreadful realisation moment that all of my efforts had been for nothing. I had actually missed the train and my chance. So, whilst holding  a sponge to my leaky eyes, I made my way back to my car where, I’m not ashamed to say, the heavens truly opened. Minutes later, after recovering from the additional realisation that I’d wasted a King’s ransom  £2.50 on a parking ticket I was never going to use, I cranked up the tunes, hit the open road and, in that metaphoric sense, cleared the cobwebs from my mind.

Quite conveniently, that super talented dude, otherwise known as Darren Hayes, just happens to have two new tracks out from his forthcoming Album, Secret Codes and Battleships. The track, Black Out the Sun, did nicely. You can watch the video here.  Darren, not unlike many artists who have scored the soundtrack to my life over the years, did the trick and, before long, I was fighting fit once more (it’s what I call Music Therapy in Coming up For Air) and, despite the fact that it was still the crack of dawn for many, I started dialling numbers on my mobile phone.

A couple of hours later,  I had my test drives lined up (well, I couldn’t let the day go to waste now, could I?) Granted, that I wasn’t on my own, nor was I battling man made obstacles or gushing torrents but, hey, it was something.  I had a veritable banquet of Evoques to choose from, as you can see from the pictures, and, I have to say, they drove as beautifully as they look. 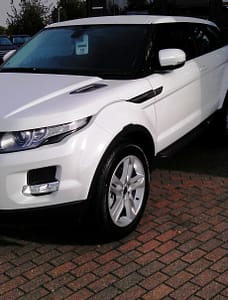 What perhaps didn’t drive as well was the price tag.  My helpful representative told me that they simply couldn’t build the cars fast enough  and that, if I placed an order today, I would most likely be looking at delivery in March 2012.   That was after my comment that I believed the Evoque  to be a beautiful car but somewhat overpriced. He retorted with, “I don’t necessarily agree. A car is worth what people are willing to pay for it.” And I guess he had a point but at a finished price tag of £45,000 + for my fairly well specced car  with some omitted options, you can make up your own mind whether or not this was somewhat pricey when you consider that it is smaller than my VW Touareg and not that much bigger than a VW Golf Plus, and lacks some of the technological features of its elder siblings.

Of course, this all means that the jury is still out on whether or not I’ll actually be placing an order for one of these beauties. The sad reality is that there isn’t much else out there that tickles my fancy and the Range Rover Evoque has, after all, been the object of my desire for the past 3 years…. who knows… watch this space (and yes I know I’ve been saying that for a while now).

The same  uncertainty overhangs the fate of  my seven year friendship with my best friend who has confirmed eagerness to hold talks next week.  Alas,  today  marked an oppressively sad time for me (and no, not just because I didn’t get to use my platinum VIP tickets) but because, despite knowing how important this day was for me, my best friend, chose to let me down without, presently,  a plausible explanation.  And,  to coin a phrase, ‘we don’t often remember what people say but  how they make us feel.’

I’m hoping Range Rover do not feel the same since they asked me to confirm my attendance at today’s event no less than THREE times, stopping short of making me promise to let them know if I wasn’t going attend so that they could give my tickets to others on the ‘waiting list’ yet, each time, I confirmed that ‘we’ would be attending.

Just goes to show that nothing in life is certain, you just have to make the most of a bad situation. Whilst I believed that before, today is probably the first time that I appreciated the meaning.