HAUNTED, THE NO1 BESTSELLER, TO GET ITS OWN SERIES

Posted by Tony Marturano on April 4, 2021 in Writing |No Comments 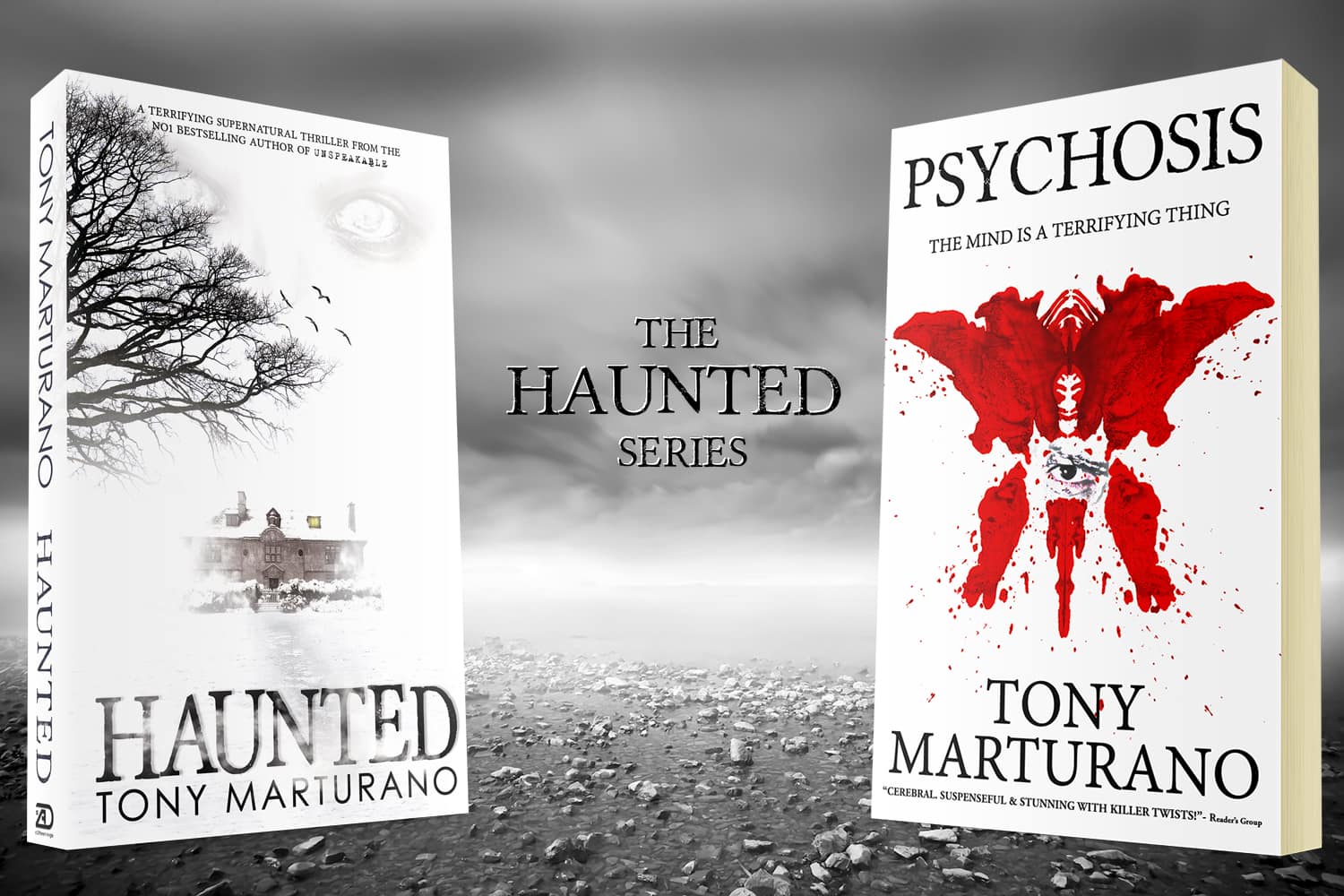 “…from Psychosis through Haunted – there is one obvious question that I am being asked time and time again. And no, it’s not if PSYCHOSIS should be read before HAUNTED.”

Hello and a Happy Easter to you.

Easter 2021 gives us many reasons to be grateful, not least the fact that there are now vaccines being distributed and jabbed into the arms of people around the world in the hope of us all being able to manage the pandemic that has undoubtedly changed all our lives, forever.

Okay. How about that for a contemplative opening to this first blog post I think of 2021?  Anybody would have thought that the pandemic might be weighing on my mind.  The reality is that, after a year, no more than usual.

How are you coping? Have you and yours been ‘stuck’ yet?  Of course, there is (as always in these cases) much controversy surrounding whether or not one should get ‘the needle’.  A subject matter much too taxing for me to brave in the early hours (04:30).

It’s spring! And I have no idea what happened to the rest of 2021.  Lockdown may just be easing here in the UK, but it’s been busy as usual here in the Marturano household, not least for the very news I am going to share with you.

I have just closed a major recruitment drive for models to feature in photographic campaigns for 2021. Yay!  With the tantalizing carrot of lockdown lifting, thanks to the unprecedented progress the UK is making with the vaccine (over 50% of adults have been inoculated), there’s a good chance of some semblance of new normality this year. With that in mind, there are many photoshoots that have been put on the backburner that I am planning to realise as soon as possible. Assuming I still have the energy to last a whole photoshoot without collapsing into an achy heap.  Do you think there’s much chance of me hiring some descendent of an ancient God to carry me around all day long while I shoot photographs?

No. Rubbish idea.   I suppose I’ll just have to stick to sensible shoes and energy tablets then.

Be sure to see the results of this year’s adventures by following me on Instagram (@MARTURANOTONY) or FACEBOOK.  Or view the results on major stock photography websites or, if you’re so inclined, my own commercial website, www.tonymarturano.photography

SHOOTING begins with some trepidation later this month with full blown location shoots (assuming the vaccination program continues to go well) this SUMMER/AUTUMN.

And so, after that warm-up act, it’s onto the main star of this post.

As many of you already know, HAUNTED, my latest supernatural thriller, was released late last year to great critical acclaim (YOURS! Much to my delighted surprise). Since then, I have been fielding an unprecedented (I have heard that word so many times in the last year that I just had to fit it into this post) number of questions and comments from you through social media and email. Some of your questions are answered in the interview below, but there is one gigantically popular question which I shall be finally answering later in this post.

Something else many of you have commented on in your reviews on Goodreads and Amazon is the way in which the book is written and the impact that this has had on you.

Both PSYCHOSIS and HAUNTED are written in the first person which means that everything Marco (the main character) experiences, you experience, quite literally during the unfolding of the story.  And I am so thrilled that some of you have highlighted how this particular way in which the books are written is making you feel more involved with the story to the point of not wanting the book to end and even missing the main characters (yes, I just had to get that in because there’s no greater compliment for me)!

When I started writing PSYCHOSIS, one of the things I felt strongly about was the fact that if I was going to write the book in the first person then I quite literally wanted it to be written that way. E.g., if the character was mid thought and there are noises in the attic, he’s going to break off that train of thought and ask, “what the hell was that?”  Consequently you, the reader, would be in the same situation, real-time.

So many of you have commented on this in your reviews and in your messages to me, and I am absolutely thrilled. It isn’t a new concept, but one you appear to enjoy.

And, of course, given the above and that many of you have now followed Marco Battista’s story – from Psychosis through Haunted – there is one obvious question that I am being asked time and time again. And no, it’s not if PSYCHOSIS should be read before HAUNTED. The answer to that question is now an emphatic YES.  For the full Pie à la Mode experience, I highly recommend you read Psychosis before Haunted.

No, it’s the other big question.

But first, some background information.

When I wrote PSYCHOSIS, it was never my intention to write a sequel. That’s because I like to write different genres. So, for me, a psychological thriller about a therapist who might be losing his own mind made perfect sense.

It was at the focus group for Psychosis that the idea for a sequel was spawned.  I speak in more detail about this in the interview below so if you would like to know more and haven’t seen it yet. Here it is.

THE MAKING OF THE NO1 BESTSELLER, HAUNTED – Interview – February 2021

HAUNTED was written as a standalone supernatural thriller although given that it features characters, a backstory and is set two weeks after the end of Psychosis, it naturally became a sequel which is how all of you are reading it.

And this makes perfect sense which is why both books will be undergoing a marketing revision to finally brand them as such.

But that’s not all.

I know quite a few of you have been looking forward to the well overdue supernatural horror, INCUBUS. And quite rightly so. The idea for this book was conceived all the way back in 2017. And since then, it keeps getting bumped in favour of other titles.  Well, the good news is that the first draft of INCUBUS is 75% complete.  The bad news, it is going to get bumped again, to 2022.

But, before you start burning effigies of me in the street, allow me to explain.

Since its release in November 2020, HAUNTED has spent more time as a UK Amazon Number 1 Bestseller than it has not. The HAUNTED audiobook, superbly narrated by Jonathan and Katie Rand and packed with a series of chilling special effects, became an instant bestseller on Audible upon its release in December 2020.  It has now been downloaded more times in three months than most of my other books combined.  And, if your reviews and messages are anything to go by, you are absolutely captivated by Marco Battista, for all his faults, and fallen in love with Buddy, the golden retriever.  In fact, as I write this, encouraged no doubt by a special Amazon Easter promotion, Haunted is fast heading back to become UK Amazon Number 1 Bestselling horror story.

No, I can assure you, I am not crowing. Proud maybe. Humbled for sure.

The success of HAUNTED has surpassed anything I could have possibly wished for, and it’s thanks to this new legion of PSYCHOSIS/HAUNTED fans out there (of which there are many. Public ratings only account for a fraction of readers).

So, I asked the question. Who would you want to read more about, MARCO AND BUDDY, the characters you have fallen in love with or characters that you haven’t even met yet?

The answer was obvious.

That is why I am absolutely delighted to announce that the answer is YES! I WILL MARRY YOU!

YES!  HAUNTED will be getting a sequel!

And, because it is, all three books will now become part of the new HAUNTED series of books.   And as you can see, exclusively here for the first time, the Psychosis book cover has turned white to match the theme of the series.

The third book, a supernatural thriller, follows on from the events at Porthcove. Obviously, I can’t tell you much more because of the few of you who haven’t quite yet embarked on Marco Battista’s tumultuous journey.  😉 (if you would like to, PSYCHOSIS AND HAUNTED are both available now from Amazon/Audible – Plug over).

The manuscript for the third book in the series (presently untitled as most of my work is until the 1st draft is complete) is slated for release at the end of 2021. Pretty much around the same time as HAUNTED. For those of you who are interested in hard data, I am presently, 30% through the 1st draft of the manuscript.

So, there you have it. On this blessed Easter Sunday, a revenant of a completely different kind.

And so, as night prepares to pass the baton to dawn, I should end this post and get it, well, posted so that I can get back to work.

Thank you so much for your support. And I truly mean that.  We’re in this together has taken on a profoundly different meaning for me these past few months.  You – my readers, my supporters are one of the reasons I am up and at my desk working every morning at 04:00.

Wishing you and yours a safe and peaceful Easter and 2021.