HOW TO GET YOUR BOOK PUBLISHED

Posted by Tony Marturano on January 3, 2021 in writing |No Comments I’m often asked, what do you think is the special ingredient to writing a number one bestseller?

My answer is always the same. There is no one ingredient. There are many.

I could start this blog post by apologising for my absence, but I realise that all my latest posts start that way, so I won’t.

Instead, let me ask. How the devil are you? How are you bearing up in this strange new world?

I know it’s been tough.  Especially for all the celebrities that have been shacked up in their mansions. As well as the many who have been furloughed with pay.  Especially folks here in the UK who I know have been bravely suffering through all of the additional holiday in 2020 while enjoying on average 80% of their salary.  Truly trying times.  Especially when you add in the additional deprivation of the many who have been unable to report live to social media from the mirrors at their local gym. Must be truly heart-breaking when compared to the many around the world who have lost loved ones forever.

I too have suffered in my own way.

Those who know me will know that I am a creature of habit.  I do enjoy my routine.

So, you can imagine my trauma when I learned that I was unable to travel to my usual sanctuary by the ocean at the end of 2020 but that I would instead be confined to quarters at my home nestled in the countryside.

When I first learned that I would be unable to travel oceanside to write after months of incarceration, I was crushed by abject disappointment until reminded myself, Dude, you’re a writer. Being sentenced to solitary confinement is an occupational hazard.

And I had a point.

So, I told myself to get over it and to instead focus on the so-called day job.  Which these days, is many things. From writing through to photography to book publishing consultancy.

Photography was out for obvious social distancing reasons.

Which left writing and publishing consultancy.

The result was that while many were enjoying an extended holiday, I was working flat out to finish my latest novel, HAUNTED as well as bringing other books to market. Indeed, while the rest of the world was dumpster diving the Netflix back-catalogue, for me it was just another busy day at the office. Which is one of the reasons for my radio silence. 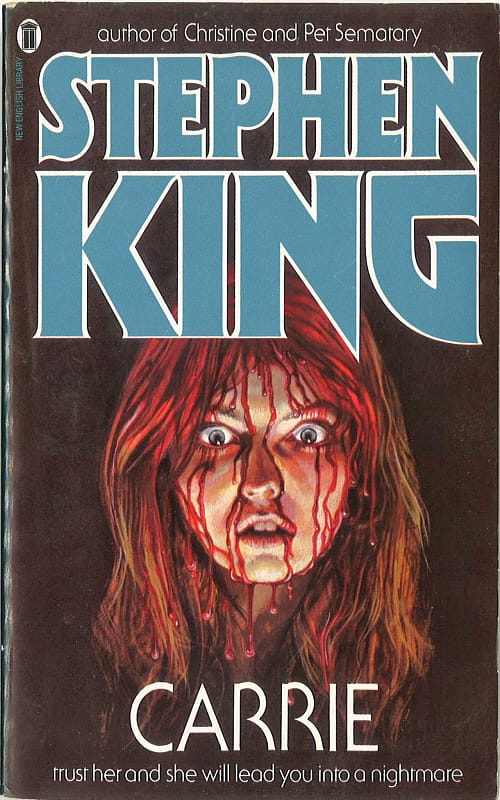 Stephen King is known for throwing his first novel, Carrie, in the garbage.

Most of you will already know, HAUNTED, a supernatural thriller about a couple who move into a house they inherited with the goal of fixing it up and getting it sold before deep winter, came out in November 2020.  What you don’t know is the agonizing that went into finishing the book in the spring of 2020.

I started writing the novel in NOVEMBER 2019 during my usual sojourn oceanside. Then, the pandemic hit and was forced to finish the book at home during lockdown.

And I can tell you… I thought it was….

Okay. A bit harsh. I thought it was alright. Nothing special.  These thoughts were made worse by an article I read about how most would assume lockdown would be an ideal time for writers to get their books finished but that, psychologically, it was the worse time. The author of the article went on to say that creative people were adversely affected by lockdown because of all the worry.

I, of course, took this literally and immediately assumed that what I was writing was garbage.  To the point of having what I often refer to as a Stephen King moment. King is famed for having thrown the manuscript to his first novel, CARRIE, in the wastepaper basket (because they still used those in those days). The pages were fished out by his wife.

The rest is history.

At 160,000 words, HAUNTED isn’t short novel. It’s way over the average word count of most novels which, as you can imagine, prompted the usual writer’s doubt and self-loathing in me. In fact, I was just days away from deleting a whole story arc from the manuscript when….

I gave it to the focus group.

Okay.  It was still my sister at this stage.  I expected her to give me that knowing look that only brothers and sisters understand. Like, “dude, are you serious?”  Instead, she came back with words like, “Brilliant.” And “Best thing you’ve ever written”.

And so, after the usual check that she hadn’t been sniffing solvents or partaking in the old wacky backy (which I should stress would have been a first for her), I opted to leave the manuscript as it was and let the actual focus group decide.

In fact, I had become so convinced that the manuscript was average at best that I decided to release half of it early. I told myself that by the time focus group members have waded through the first half of the book, I’ll finish revising the second half.

You can imagine my surprise when, just a few days later, members of the group were berating me for the actual second half.  Even then, I thought it was a joke telling myself that they couldn’t have possibly ploughed through all that and liked it.

It wasn’t a joke.

HAUNTED went on to attain one of the highest scores ever awarded to one of my manuscripts by a focus group.  More so. The votes were unanimous. Needless to say, I was quite emotional during that video conference. Which by the way I had dreaded because were unable to meet in person which meant I didn’t even have slabs of cake to comfort once the damning scores started rolling it.

When HAUNTED was released in November 2020, it was dubbed and instant HOT RELEASE by Amazon.

Shortly after and to this day, several weeks later, it is still preening itself at number one as an Amazon bestseller.

Haunted had been a number 1 bestseller for over a month before the audiobook was released and became a bestseller on Audible.

As a publishing consultant, I often receive requests for tips.

I’m also often asked, WHAT DO YOU THINK IS THE SPECIAL INGREDIENT TO WRITING A NUMBER ONE BESTSELLER?

My answer is always the same. There is no one ingredient. There are many.  And, after, uh hum, quite a few decades in the publishing business, I have been exposed to each and everyone one of them. And I can tell you. It is tough and often mined with disappointment.

The barrier to getting published used to be getting published! I served my time with the crushing blow of multiple rejection slips (yes, I was around for those). Until publishers stopped accepting unsolicited manuscripts.  Then, the rush was on to try and secure an agent. Before agents stopped accepting unsolicited manuscripts.

Now, while the few members of the global publishing cartel focus on the guaranteed money-makers with the occasional gamble, the rest of the world is busy carving its own literary dynasty through self-publishing platforms.

While this has levelled the playing field in some ways, it’s also made things much more difficult.  E.g., the release of the HAUNTED audiobook was delayed by a whopping 2 months because of the distributor’s backlog.

There’s a lot of mediocrity out there. Elevating a novel above all the noise has never been more challenging.

Plot, editing, proofing in the life of a book is just the beginning. Branding, marketing, reviews, and that essential reader-base is the middle and (hopefully) a satisfying end.

There is much to putting a book out into the world and for it to enjoy a modicum of success.  Way more than I can include in this post.

But the first rule is.  DON’T GIVE UP.  Write it, revise it, and then hone some more. Then, get an honest opinion from someone you can trust (who reads a lot!) and not someone you know will tell you what you want to hear. This is one of the reasons why I give my new babies over to a bunch of strangers to critique before starting the next draft.

GET ADVICE
If your budget allows, seek the advice of those with publishing experience. You can try it alone but be prepared to watch anything you found remotely creative and or enjoyable about the writing process devoured by a gargantuan beast of technical know-how, red tape and industry foibles.

INVEST IN A DECENT COVER
Invest in a decent cover design. Seek out covers you love and try to recruit those designers. You’re dealing with an astute consumer. Nothing screams self-published (and thus-often wrongly- assumed of low quality) than a stock image with a title slapped on it in garish font (which by the way, did you remember to secure the rights to?).

INVEST IN A DECENT EDITOR
People LOVE to complain. Nothing motivates the keyboard warriors more than to have spent (on average) the price of a latte on what might have taken you years to complete only to find a coupe of offending typos. They’ll instantly condemn the whole thing with a negative review. While statistics show that most satisfied folk don’t even bother to leave a rating.  It’s a skewed representation of the general likability of a book. Nonetheless, we live in a ratings culture and these could spell the death of your work for those sheeple who rely on the opinions of others. The focus should not be on getting your book out there but on ensuring that it is the best that it can be before you do.

I’ve had/and still do have people complain about grammar in my books because they’re written in UK English and not US American.

Accept this as one of those occupational hazards.

THEN MARKET THE HELL OUT OF IT!

Marketing is a whole post of its own… hell, a series of posts because it is one of the most important elements of the whole process. Assuming you don’t just want some friends and family to read you.

The general myth, in this era of self-publishing, is write it and they shall come. I can tell you now, as much as it may come as a shock to you, that is absolutely untrue.

I have received a lot of email from wannabe authors telling me about a manuscript they wrote many years ago and how they would like to get this out to a worldwide audience and do I have any tips or advice.

Correction. Getting the book out is relatively straight forward. Gathering an audience large enough to make the endeavour worth the time is hard.

But it isn’t all doom and gloom.   There is an audience out there for your book. Now more than ever. The trick is to ensure that it is written, packaged, and presented to those who want to read it the most.

At the end of last year, I discussed a new endeavour with one of the publishing houses I have been working with. It’s an exciting project but it’s way too early for me to be able to share any details with you.

Rest assured that I’ll be posting any updates here as and when I receive them. Hit the subscribe button if you want to be kept in the loop.

Until then… happy writing!