THE GIFTS & CURSES OF MY HAUNTED BOOK READ

Posted by Tony Marturano on October 31, 2017 in Writing |5 Comments 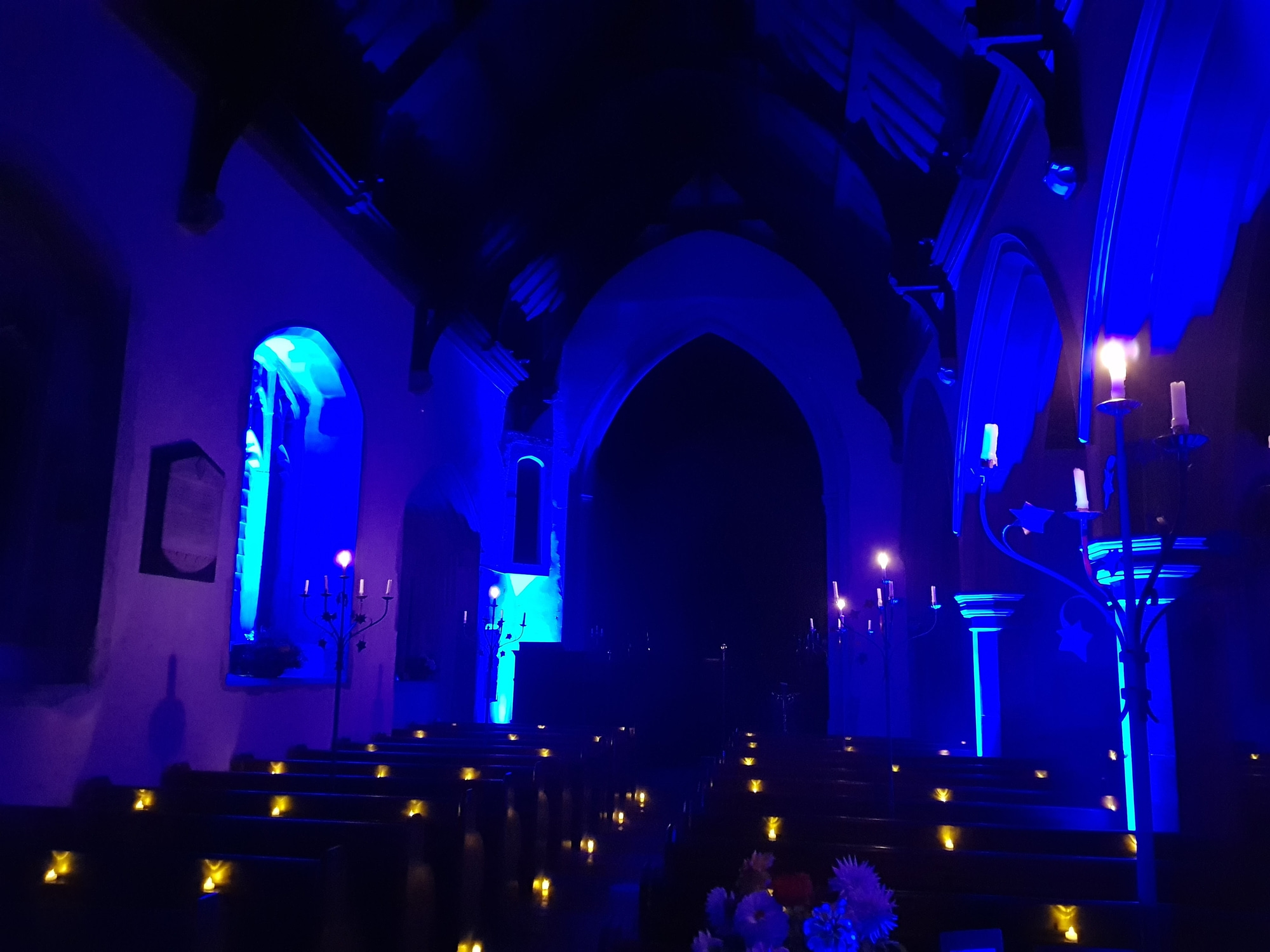 “After the lines faded down and the house lights up, the curses of this otherwise successful event brought themselves to bare…”

It was a long day, full of ups and downs but I’m happy to report, successfully executed despite a couple of disappointing things.

Firstly, I don’t think anybody from the crew truly appreciated just how popular the Church of St Andrew & St Mary in Grantchester actually is.  During setup, we had a very generous influx of visitors who wanted to take a look around the church to understand its history and, um, to find out more about ITV’s Grantchester television series that is filmed there. Oh, and to have to have a picture taken with one of the popup banners promoting the same.

Although, I dare say that it probably was a bit confusing for some, as they roamed around the grade II listed building, part of which dates back to the 14th Century.  They were certainly exposed to a mixture of messages. Some religious, others about the production of the series, and then ours projecting imagery of supernatural fiction! If I’m perfectly honest, it was somewhat entertaining watching folk bounce from message to message with a puzzled expression on their faces. Priceless.

Of course, we were quick to explain the peculiarity.  You believe me, right? Don’t.  For the Haunted Book Reading crew, it was small, sweet revenge for the fact that, out of the fifty or so people who visited the ancient building and took pictures, none managed to conjure a few pennies for the donation box before walking out of the place. 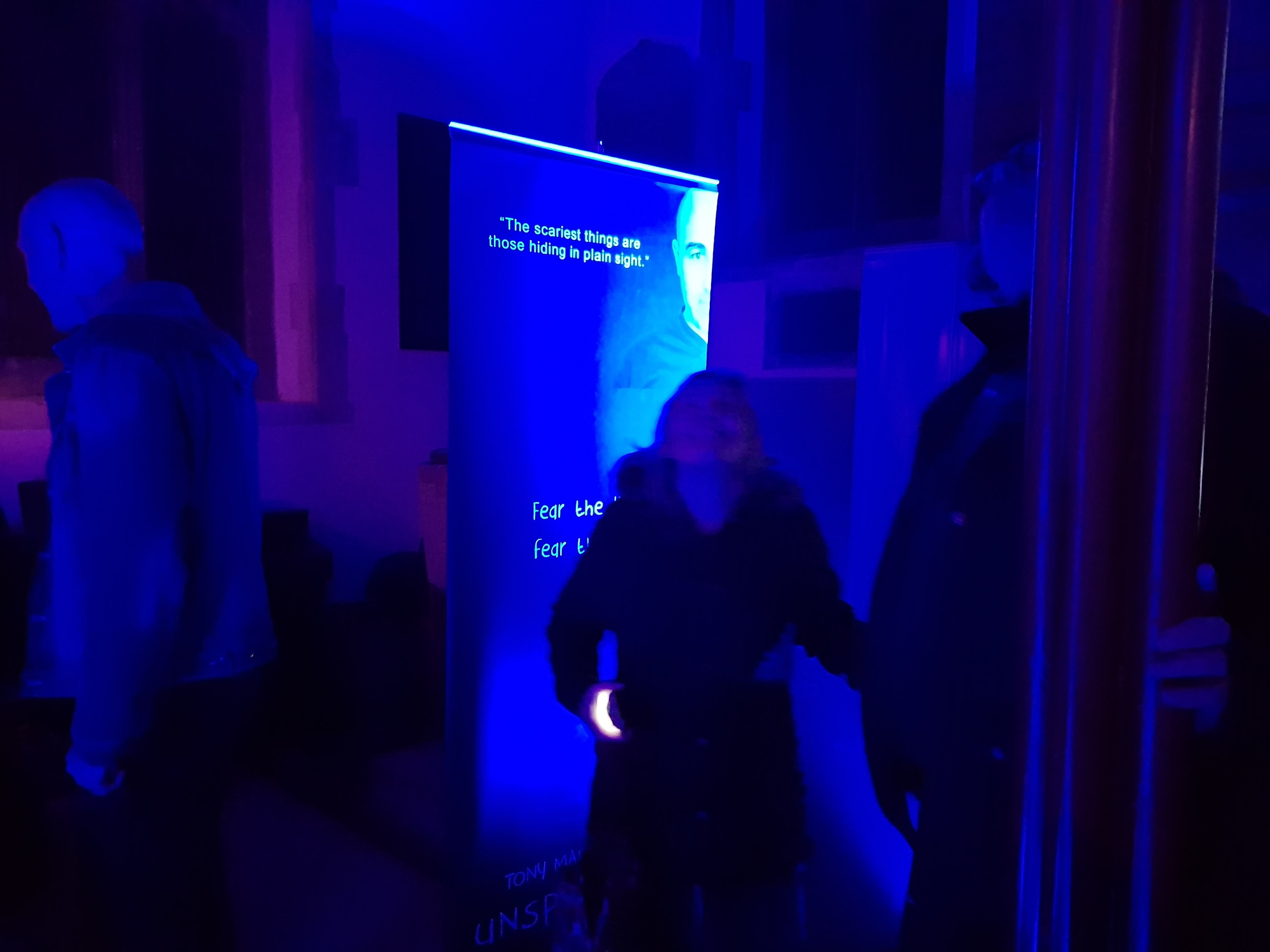 Anyway, setup for the creepy book read went particularly well.  And some of this was thanks to my fantastic crew – to whom I am most grateful –  but also because of the formidable support we received from churchwarden, Margaret Barwise, who from planning through to get-in and get-out was always on hand to provide support and help us overcome any challenges.  Thank you, Margaret!

And thus, by dusk fall, one of the naked trees outside along with the building’s giant concrete pillars were painted with atmospheric blue light,  candles flickered amber, and mist eerily crept up the aisle as, from the organ player’s balcony, one of the creepy characters from Unspeakable looked on.

At 19:00 precisely, eerie music that you wouldn’t want to listen to alone in a dark car, down windy country roads, filled the church, enveloping members of my VIP guest list as they were served drinks and were shown to their seats while I skulked in the shadows at the front of the church with a hood over my head.

I stepped out of the shadows and into the fog that, by this time, had well and truly shrouded the place, and, rather appropriately, since I began my reading with a chapter from Unspeakable that tells of  the hideous encounter between the main protagonist, Rupert Harrison, and a stranger he picks up one lonely, foggy night. This was followed by another equally creepy chapter and then an excerpt from my psychological thriller, Psychosis, before I was out of time.

Then, it was onto the Q&A, but not before handing out a free Psychosis T-shirt to birthday celebrators in the audience.

WAITING
The audience waiting for the show to begin

When it came to the Q&A, I actually thought that, for the first time ever, there were going to be no questions, because when I threw out my own “does anybody have any questions for me?” the church went deathly quiet.  However, just before I was about to move the evening on, somebody perked up with a question which was then followed by another and then another.  Phew. For a second, I thought it was going to be one of those really awkward moments where I shift my weight from foot to foot and look at my feat while avoiding eye contact with dozens of sets of eyes blinking expectantly at me!

Eventually, the questions actually dried up and then it was over to the book signing desk where the real madness began. This part of the evening is always a bit of a scram as die-hard book lovers brave the line while I try to beat my own record for putting my signature to a page in an effort to move the line forward while striving not to appear rude or ungrateful.

For me, this was the best and probably worst part of the evening. It was where I witnessed many queueing patiently to meet me, get their books signed and collect a goody bag to take home while others barged by them without so much as a penny in the church’s collection box. Something that, at least to me, was disappointingly reminiscent of the day church visitors.

Everybody who registered for this (and other similar) events was very much aware that this doubled as a fundraiser for the church. And, while there is clearly no obligation nor expectation for anybody to actually buy books, I do feel that it is, as a bare minimum, respectful to push a few coins in the church’s collection box. I mean, some of us will gladly spend a fiver for Starbucks. I don’t think they would have missed a few coins.

I can only hope you people are much more generous wither other causes. Yes, you know who you are.

That said, the majority of those who attended did brave the line and bought most generously. To you, I extend my deepest gratitude. Your contribution will be doubled and those funds donated towards the upkeep of Grantchester Church so that many others will be able to visit, walk around and…um, have their pictures snapped with the TV show’s pop-up banner.

So, okay, sarcasm aside.  Whether or not you are a person ‘of faith’ (which, by the way, I am not- at least not currently practicing), I still believe it vital, if only for their historic importance, that, where possible, each and every one of us consider foregoing the occasional designer coffee in favour of a donation to the preservation of these unique buildings.

So, after the lines faded down and the house lights up, the curses of this otherwise successful event brought themselves to bare. First with the disappearance of an expensive wireless stage lamp, hired specifically for the evening, and then with the loss of my beloved Digital SLR camera. Both were missing by the end of the evening and, despite the crew’s best efforts, remain lost. And, while the lamp was simply fulfilling its purpose of staining the gnarled branches of the naked trees a cold midnight blue. My camera, on the other hand, was being used by a crewmember for both the evening’s official photos and my own personal record. It was then packed for its return home. Only, it never made it there. When I looked for it the next day, I couldn’t find it and thus it is now missing.

ME, SIGNING BOOKS
These photos were taken by a crew member on his phone. If you look closely, you can see my camera on the desk. This is the camera that was stolen along with official photos from the evening.  (for more non-official snaps – see my Facebook page).

You will probably be thinking that it’s just ‘a thing’. That I can get a new one, right? Well, as always, it’s not just its monetary value, but the sentimental one; that camera has seen me through some of my best photoshoots. And, of course, losing it also means losing the official photos from the evening.  Similarly, replacing the expensive uplight lamp is money that could be going to the church which, as you know, is one of my main reasons for leaving the sanctuary of my home and braving the world outside! So,  anyway, if the selfish person who took my pride and joy is reading this, do me a favour and at least post the pictures!

It’s okay. I know that’s not going to happen. I guess that’s life.  Sh** happens to us all. Sometimes more often than we’d like. Yet, good or bad, these things are all part of living our very short existence on this planet. I strongly believe that it’s how we react to and the effect that we allow these negative things to have on us and our personalities that ultimately matters.

And so, I close this post – in floods of tears as I mourn the loss of my photographic companion – I’ll leave you with some cheery news. We have a couple of Psychosis T-shirts to give away. So, if you fancy getting your hands on a piece of Haute couture, all you need do is sign up to this blog (if you haven’t already). Simply hit the follow button (normally found at the bottom of this post) and enter your email address. I’ll be randomly selecting some email address winners over the next few weeks, as soon as I’m safely ensconced in my hideaway by the ocean.

Oh, didn’t I mention that? Yes, I’ll be leaving soon for some well-deserved time on the Southwest coast of England both to recharge my batteries and, most importantly, complete the first draft of Incubus, my new psychological horror, out next year.

In fact, there’s a good chance that my next post will be coming to you live from one of my favourite locations next month.

Until then, I’ll leave you with some of the footage from the evening. Thankfully shot on a crewmember’s mobile device.