RANDOM ACTS OF KINDNESS OR WEIRDNESS?

Posted by Tony Marturano on March 12, 2017 in Life & Relationships |No Comments Picture the scene: you’re walking down the street, minding your own business, and a person with a beaming smile accosts you, hands you a bottle of water and says to have a drink on them.

What’s your reaction?  Gratitude or suspicion?

Well, if it was suspicion, then you wouldn’t be alone, especially here in the UK where our aloofness has been known to breed abject cynicism. And yes, I’d probably be one of those most unlikely to throw his arms around a complete stranger, in gratitude, for fear that they’d be handing me a bottle of toilet rather than spring water. That, and well, quite frankly, it’s just weird, isn’t it?

Yet,  standing on a street corner and handing out bottled water to complete strangers is one of a series of ‘random acts of kindness’; a minority movement that has gained momentum all over the world. Their aim? ‘spread the love’, whichever way is most practical, this includes dishing out ‘hugs’.

Many artists have embraced this new practice by scheduling meets with fans for a good old hugging session. Indeed, it’s only while researching this post that I discovered that there’s actually a NATIONAL HUG DAY. If, like me, you don’t know anything about this special day, it’s actually January 21st.  And, it’s quite a popular thing. Especially in more cosmopolitan places, where hugs are dished out like hot dogs on street corners. Places where you would be weird for thinking it is weird.

Yes, it appears that these days there’s a whole new breed of Matha Amrithanandamayi Ashram. Otherwise known as Amma of India, an elderly lady who travels the world embracing people. Amma caused quite a stir right in our own backyard,  when the UK leg of her ‘tour’ saw her stop off at Alexandra Palace where literally thousands queued patiently to receive ‘a hug’.

Nauseous yet, or would you like to read more?

You do have to ask what exactly might be missing from the lives of hug queuers that compels them to stand in line to receive a hug from a complete stranger. I guess it’s an acquired taste. Would you, could you, have you queued  to receive a hug? 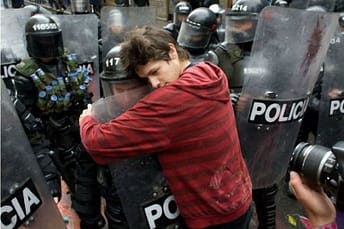 I’m reading this and I can hear my own cynicism creeping in.  However, I assure you that I am not that much of a cynic, I’m merely playing devil’s advocate for, believe it or not, and yes, as much as this is most certainly going to damage my stoical masculine demeanour, I’d like it known that I too am a hugaholic.

Yes, I’m saying it loud an proud: “My name is Tony and I’m a hugaholic!” There. It feels so much better now that I’ve confessed. If something stands still long enough, I’ll hug it. But, that’s generally trees, oh and family and friends. Well, I do come from Italian heritage and they’re a very tactile bunch (as are most of the Mediterraneans). I have unashamedly practiced hugging for many years, generally on unsuspecting, stiff upper lipped, typically British friends. Needless to say, they, not unlike most humans, resisted at first  but I believe, not unlike ‘The Borg’, that resistance is futile. Indeed, I can’t imagine any of my close friends (yes, I’m talking about the blokes here as you women don’t appear to have the same reservations) who would not part company with me before dishing out a hug.

The power of  ‘the hug’ is clearly evidenced in the unmistakable scenario where, in the company of a distressed person, one feels compelled to throw one’s arms around them or (for the more spatially aware) ‘tap’ them on the back in a consolation gesture that’s often confused as a ‘burping’ slap.

The etherals would have us believe that this is due to ‘transference’; the negative energy from the distressed/sad person is transferred from them to the donor in exchange for positive energy.  And I could go along with that, although the experts have a much more plausible (and yes) scientific explanation, it’s that now topical hormone, called Oxytocin.

Oxytocin is made in the area of the brain called the hypothalamus and it  makes us feel good when we’re ‘close’ to family and other loved ones, including pets.  It does this by acting through what scientists call the dopamine reward system.  Dopamine is a brain chemical that plays a crucial part in how we perceive pleasure.  Many drugs of abuse act through this system.  But Oxytocin does more than make us feel good, it lowers the levels of stress hormones in the body, reducing blood pressure, improving mood, increasing tolerance for pain and perhaps even speeding how fast wounds heal.  It also seems to play an important role in our relationships.  It’s been linked, for example, to how much we trust others.  Researchers are still studying what part Oxytocin plays in feuding loved ones but one thing  they can say with certainty is that physical contact affects Oxytocin levels.  If you don’t like adverts, look away now, here comes a natural plug!  “You can read more about this in my book, COMING UP FOR AIR.”

So, could Oxytocin be responsible for the other practice of hugging complete strangers or the selflessness displayed when executing a ‘random act of kindness’? There appears to be a link with the belief that whilst we’re thinking about the problems of others we’re forgetting about our own. In other words, doing good makes us in turn feel good (there goes the Oxytocin theory again).

RAOK (as it’s affectionately known) is becoming more and more popular these days, and it’s wondered if its a reaction to what many now believe is a cynical and perhaps somewhat  jaded world,  where we’re terrified of letting our children play outside the security of our homes, unsupervised. Where hitch hiking is a self imposed death sentence. Where parents need a form signed in triplicate to take pictures of their own children, and  where we’re terrified of drinking out of the same bottle of our friends for fear of catching some kind of disease (see my  previous blog post; over 30? Congratulations, you survived!). Some humans are reverting ‘back to basics’ in an effort to rediscover humanity not as it is but as it was, free from neurosis, obsessive compulsive disorders, self absorption,  narcissism, materialism (yes, I could be here  a while) to rediscover that warm and fuzzy feeling also known as the ‘milk of  human kindness’.

So, if you’re interested  in performing  some ‘random acts’ yourself, there are a series of websites dedicated to precisely that. That’s right, if you wake up one day with a warmth spread over your body (that doesn’t involve urine)  and feel like sharing the love, there’s a veritable banquet of suggestions going free at  www.randomactsofkindness.org or you could check out 29 ways to carry out random acts of kindness, and there’s even a group founded by the actor, Misha Collins, http://www.therandomact.org/wordpress/.

Better still, take a look at the list and then ask yourself how many of those acts have you personally conducted over the past year?

There’s no mistaking that we’re living in a whole new world and, whatever your thoughts, sickly or cynically, they are determined  by your own perspective of it. The Americans call it ‘pay it forward’; a good deed repaid by doing it to others instead.

The richest reward is not often what we get from others but what we do for them and the effect it ultimately has in turn on us. The following video illustrates precisely that so if you have 3 minutes, I highly recommend you take a look, it’ll make you feel good, I promise.