Posted by Tony Marturano on March 30, 2014 in psychology, writing 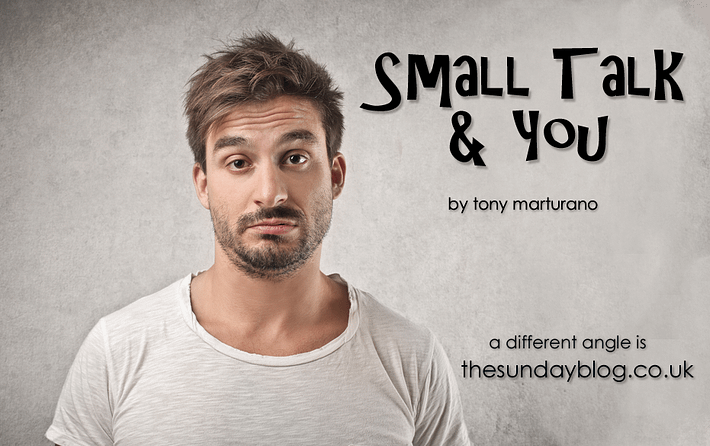 “Apparently, weather, sports, pets and travel are the four most common topics of small talk which is something many of us struggle with, be it because words simply don’t come to us or we just don’t like making it.”

So, yesterday saw a major milestone in the history of England & Wales; ‘same sex marriage’. Or as somebody else said, “I like to just call it ‘marriage’.”

I guess he has a point.

So how about that then?  What do you think about this all new ‘same sex’ marriage?  Are you excited? Irked? Disgusted or indifferent?  Regardless of how you may feel, know that there are many courts around the country who’ll most likely breathe a sigh of relief since many dissolution of unions will become much easier to deal with in the eyes of the law.   I say that because, as you may know, simply living with somebody does not make the aftermath of any potential separation any easier to deal with since the law governing division of assets for a married couple are much clearer than those governing couples that merely ‘cohabit’.

Yes, as you may have read in my post THE DEATH OF MARRIAGE  just because you shared a home with someone for many years it doesn’t necessarily mean that all the rights and entitlements of a spouse are automatically bestowed upon you. Check out the article for more information.

In the meantime, I want to talk about brighter things. It’s spring! And it’s Mothering Sunday!  Not to be confused with Mother’s Day.  The difference, of course, being that Mothering Sunday is a religious holiday that takes place on the 4th Sunday in lent whilst Mother’s Day is merely a commercial holiday originating in the United States in 1908. The day was ear marked by Anna Jarvis as a way to honour her mother but it soon (much to Jarvis’ dismay) became commercialised and ultimately hijacked Mothering Sunday, today, which also promises to be one of the very first in a series of hot days for England.

I read somewhere that England is actually in for a summer like no other this year. Apparently, we’re in for literally weeks of sunshine to rival our Mediterranean cousins.   Isn’t that wonderful? So much material for those awkward moments in waiting rooms and any other encounter we may have with people we don’t know much about.

What,  you don’t engage in small talk?  No, “lovely weather we’re having lately” with the plumber, that overfriendly checkout clerk or even that new customer? No bemoaning the “typical British weather”?

Why, how very antisocial of you.

Apparently, many of us struggle with small talk, be it because words simply don’t come to us or we just don’t like making it. I’m certainly guilty of the latter.  Don’t get me wrong, I don’t believe every conversation needs to be deep and meaningful, far from it.  But whilst I’m apparently somewhat accomplished and making small talk, it’s one of my least favourite things to do. I must have some kind of banality threshold after which I literally start to suffer, and thus, for me, encounters with strangers are complicated not by a lack of conversational topics but more by my selection and pitch of the appropriate topic.

Apparently, weather, sports, pets and travel are the four most common topics for small talk. Now, that first one is easy, the second, well that’s pretty much an acquired taste, the other you’d have to have taken a Sherlock course to establish whether or not the other person actually has any pets if they’re not actually attached to the animal at the time, and travel, well, not sure opening the discourse with “have you been on any holidays lately” is appropriate beyond the stereotypical confines a hairdresser’s inner sanctum.

Yes, chatting with strangers doesn’t come naturally to most people, and there’s no doubt that the whole thing is further complicated by social influences and settings. For example, Americans are way more likely to strike up a conversation with a complete stranger than the majority of us stuffy nosed Brits.  Yes, as difficult as it may be to hear those words (for some), it is nonetheless a stereotyped reality. Something I have experienced first-hand both socially and whilst conducting research for my writing.

There’s no doubt that us Brits do tend like to keep ourselves to ourselves.  We don’t all enjoy early morning neighbourly chats over the garden fence or on the front door for that matter, and we certainly don’t appreciate neighbours descending on us wearing nothing but a dressing gown and a smile.  (No inference intended).

The other day I read an article about how one national newspaper planted children in the middle of a busy high street and had them pretend they were lost to see how many people would actually stop to speak to the children.  In 2014, what do you think happened?

Well, there are a variety of reasons why many of us aren’t interested in the goings on of strangers no matter how vulnerable they may be.  Way too many to list here.  But we do live in a world where news is fed to us through an intravenous drip of printed material, websites, social media, television, radio and mobile devices. News that is often carefully selected for its sensational content that feeds and reinforces social terrors of the innocent who are molested, victimised,  wrongly accused or even hurt that our natural disposition is for flight rather than fight, and so it makes sense to avoid a potential flashpoint rather than place ourselves directly at the heart of it.

Whilst logical this is clearly a sad state of affairs because it’s becoming clearer; in our quest to protect ourselves and each other we’re actually unilaterally fabricating a far more terrifying evil, a danger so great that it threatens the whole of mankind; apathy.

The reason why small talk with strangers is damn hard for many, including yours truly, is because it’s meaningless to us.  We don’t know these people so why should we make an effort beyond that of common courtesy?  A stranger may well be just a friend we haven’t met yet but how many of us have the time or inclination to find out? We’re often way too busy with our own problems, and often debilitated by the fear that our words or indeed our actions may be misconstrued and potentially generate even more.

That said, ever since I was a teenager (and yes that was many years ago), I’ve always been interested in people. For literally decades, I’ve actually made a life art out of understanding ‘types’ of people. I’ve been honing this skill in my quest to understand what makes us tick, why do we do the things we do? What motivates us? What moves us? What compels and influences our behaviour. I’ve often been told, normally before somebody asks me to conduct one of these ‘assessments’, that I have a talent for this ‘kind of thing’.  My answer is always the same. “We all have the talent. I see what everybody else is capable of seeing, they just need to want to see it.”

The truth, in whichever form, is often right before our eyes but we just need to want to see it, be it about somebody else or about ourselves. It’s in our expressions. It’s in our words, what we say, when, and how we say it.  It’s in what we wear and how we wear it.  It’s in how we comport ourselves, when and with whom. It’s in our actions, when we make them and the motivation behind them. We’re all the walking talking forensics of who we are. We just need the ability to see.

The interesting dichotomy is that whilst social media may be encouraging many of us to share and share more, we’re actually becoming more insular. We’re battening down the hatches against the rest of the world and focussing more and more on the things that orbit our own; family, friends and ourselves. I often capitalise on the latter when I’m faced with one of my ‘small talk’ challenges; simply ask the other person about themselves.

These tests in themselves are harmless and, especially when shared through social media, provide a very quick vehicle for us to talk about ourselves even when we aren’t.  A lazy way for the people who know us to get to know a little bit more about us but without the effort (providing they actually take the time to read the results of the test).

I, on the other hand, am taking the direct approach next weekend. I’m stepping up the social antics next Saturday 5th April as I’m hosting another Casa Bella event. What do you mean you’ve never heard of it’?   Well, if you’re feeling so inclined, feel free to check out and follow the Facebook page by clicking here.

ANGELS & DEMONS is being hosted for the very first time ever in the UK, it’s a whole new dinner party experience.  And I’m hoping it’s going to be one of the flagship products to feature in my new business venture which is all about bringing people together to live, love and share life.  Look out for the special report and pictures after next Saturday’s event.

Speaking of which, I should get on with the preparations and leave you to enjoy your Mothering Sunday. Whatever you do today, I hope you enjoy your quality time with the people that really matter the most to you, including yourself, for you and you alone have the ability to be your own best friend or worse enemy. 🙂