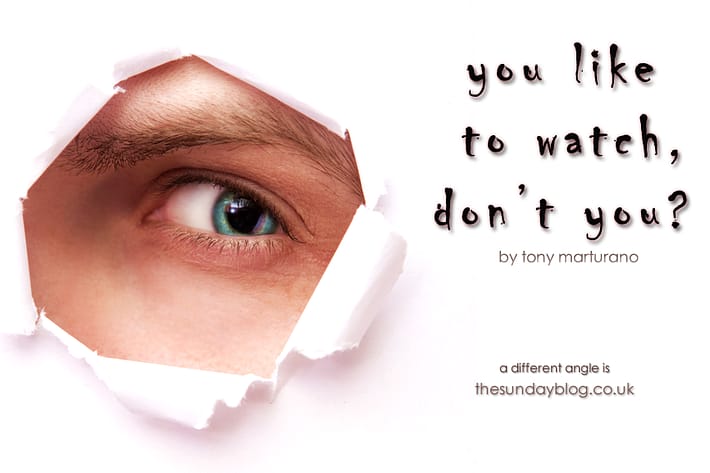 “Voyeurism is the interest in or spying on people engaged in behaviours normally considered to be of a ‘private’ nature…Skulking in the shadows of cyberspace, watching the world of your ‘collected’ contacts is just another form of voyeurism, is it not?”

Yesterday I grabbed my machete and went on a rampage and today I feel much better for it.

I’m talking metaphorically of course about my so called Facebook friends.  I realised that, despite my strict application and approval process, I still managed to accept quite a few people from my past as ‘contacts’ on Facebook, only to wake up a few months down the line to discover that these people are more about ‘collecting’ groups of people, like barnacles on a rock, than they are about interacting with and thus showing an interest in anything I post on my wall.  Worse still, I’d actually forgotten that some of them existed on my ‘friend’s list’ whilst others opt instead to plague me with some of the most banal statuses, the tedium of which would challenge the attention span of a battery chicken.

“OMG!! My son is so cleaver!! He just took the skin off his banana but the way he did is the same as monkeys do, front the bottom!! He is so proud of himself! Bless him!! Daddy’s so proud of you!!!”

“My friggin shoe is split too so guna have to walk around with a hole in it all day tomorrow!”

“I’m about to devour a whole Cadbury’s bar of chocolate to myself.”

“Should of left my wooly hat n brought my felipe flops.”

“I have to remember to buy white socks for work. Or if anyone has an extra pair I could borrow, please let me know ASAP.”

“I slept all day today.”

“I really have nothing to say today.”

“I need more scrunchies. Running out!”

“I was throwing up most of the weekend, but now it has stopped. Might see a movie tonight. Maybe Batman, but we’ll see.”

“that bar of chocolate was soooooo goooooood.”

And on and on…. There’s no end to the tedium.

But then again, what exactly is tedious? It’s all subjective I suppose, and that’s precisely the point. What I may find interesting somebody else may not, this is undisputed.

However, there is one fundamental principle of Facebook, one of the reasons why Mark Zuckenberg & Co. developed the concept in the first place and that was to ‘bring the world closer together.’ The dream was not just to enable users to share their personal details with friends, family, acquaintances and the Facebook advertising world but to enable the world to ‘socially’ connect.

Facebook has been dubbed ‘the third largest country in the world.’

So, I’d be forgiven for taking this ‘vision’ literally. I have no interest whatsoever in amassing my list of so called friends, since we all know that it is physically impossible to interact with all of these people (see Facebook Friends. Isn’t it time for a good culling?). I do it because I’m a social kind of guy who has a genuine interest in people, human nature and certainly on the events taking place in the lives of those I care about.

Those who know me, and regular readers of this blog, will know I come from an Italian family and thus will understand that, by nature, we can’t help but socialise and be social.  We spend time (nearly 3 months) and money on hosting some of the most extravagant events here at Casa Bella with just one purpose; we want our guests to feel special and to go home knowing they’ve had a unique experience.

This is important to us.

I extend this sentiment to Facebook which, in my opinion, is not in any way a replacement but an extension of my social universe. I’m not logged on every evening but when I do log on, I’m genuinely interested in and want to engage with what’s happening in the world of the contacts on my friend’s list because, after all, that’s why they’re there, isn’t it?

What other reason would there be to add people you didn’t particularly like a school, work colleagues, ‘friends’ of ‘friends’, acquaintances you met once, even family members you never speak to? It’s to show an interest, engage with what’s happening in their lives, right? How much you enjoyed seeing them ride camels in the desert, how dapper they looked at the baby’s christening or just how much fun those sumo wrestling costumes they were wearing looked.

No. It appears  that many are much happier ‘watching’ these activities, looking through all of the intimate things; photos, details, feelings, emotions, causes, relationship statuses and more but not saying a word.

I refer to these people as  ‘shadow dwellers’  since they  linger in the background, watch but don’t say a word. I find that creepy.  Then again, I guess I shouldn’t judge them too harshly because, according to a study conducted by two German universities, visiting Facebook and witnessing the holidays, love lives and successes of others can trigger feelings of loneliness, misery and envy.  This in turn has bread a whole new generation of ‘hater’; a person who cannot be happy with another person’s success. The research found that 1 in 3 people felt worse and more dissatisfied with their life after visiting the site, the majority of which browsed without contributing. “We were surprised by how many people have a negative experience from Facebook with envy leaving them feeling lonely, frustrated or angry,” researcher Hanna Krasnova from the Institute of Information Systems at Berlin’s Humboldt University told Reuters. “From our observations some of these people will then leave Facebook or at least reduce their use of the site,” Krasnova said.  Researchers from Humboldt University and from Darmstadt’s Technical University found vacation photos were the biggest cause of resentment with more than half of envy incidents triggered by holiday snaps on Facebook. Social interaction was the second most common cause of envy as users could compare how many birthday greetings they received to those of their Facebook friends and how many “likes” or comments were made on photos and postings.

“Passive following triggers invidious emotions, with users mainly envying happiness of others, the way others spend their vacations and socialise,” the researchers said in the report “Envy on Facebook: A Hidden Threat to Users’ Life Satisfaction?” They found people aged in their mid-30s were most likely to envy family happiness while women were more likely to envy physical attractiveness.

Sharon Stone plays the role of Carly Norris in the 1993 movie, Sliver.

These feelings of envy were found to prompt some users to boast more about their achievements on the site to portray themselves in a better light. Men were shown to post more self-promotional content to let people know about their accomplishments while women stressed their good looks and social lives. The researchers based their findings on two studies involving 600 people. The researchers said the respondents in both studies were German but they expected the findings to hold internationally as envy is a universal feeling and possibly impact Facebook usage.

Carly Norris once asked, “You like to watch, don’t you?”

Skulking in the shadows of cyberspace, watching the world of your ‘collected’ contacts as it streams by like a railway station’s arrivals board, scoffing jelly babies, is just another form of voyeurism, is it not?  The web equivalent of a Big Brother experiment, only with people you actually recognise.

Voyeurism is the interest in or spying on people engaged in intimate behaviours normally considered to be of a ‘private’ nature. One principle characteristic of voyeurism is that the voyeur does not normally relate directly with the subject of his/her interest, who is often unaware of being observed.

The term comes from the French voyeur, “one who looks”. A male voyeur is commonly labelled “Peeping Tom”, a term which originates from the Lady Godiva legend. Although the term is usually applied to a male who observes somebody through their window, and not in a public place.

Obsessive voyeurism with one subject is known as stalking.

So if the above is voyeurism… what exactly is socialising? Here comes the science bit:

Facebook or ‘the social network’ as it’s also known (spawning a film by the very name) is, believe it or not, about socialising, and social interactions are the acts, action or practices of two or more people mutually orientated towards each other’s selves. This means that the parties must be aware of each other although it doesn’t necessarily mean being in sight of each other. Friends writing letters are socially interacting, as are generals preparing opposing war plans. Social intercourse is not defined by physical relation, behaviour or distance, it’s a matter of mutual subjective orientation towards each other. Spying, for example, is not social interaction if the other is not aware that this is taking place.

The fact that Facebook breeds voyeurs isn’t exactly news. There are numerous articles out there on this very subject, there’s even a master thesis by a Canadian graduate who found that no less than 88% of people she surveyed who had recently gone through a breakup had “spent time  looking at, analysing, or ‘creeping’ their ex’s Facebook profile, probably during working hours!

It’s easy to underestimate just how much personal information we publish to our Facebook page and that’s because we’re lulled into a false sense of security; we believe that we’re publishing information amongst ‘friends’ but the reality is far from that since many of us collect  contacts as we do clubcard points

That said, I wouldn’t want anybody to think that I’m knocking voyeurism in any way since most people enjoy some titillation, yes, even us Brits; we may not like talking about it but we certainly like doing it, titillation that is.  In fact, I’ve just discovered that there’s a Facebook page all about voyeurism, it features an array of images of very sexy, scantily clad females (and the odd male) and it boasts a following of 28, 376 people and, thanks to the power of Facebook, I can tell exactly whom on my contact list is already following that page.

In the internet age, especially with most of the populous owning a mobile device, the social medium, be it Facebook or the next best thing, is here to stay.  Who you choose to add to your contact list, how much you choose to interact with them, as well as what you choose to share, be that love, life, happiness, sadness goals and dreams is, as always, up to you.

“…I have spread my dreams under your feet;
Tread softly because you tread on my dreams.” – WB. Yeats

Have a social Sunday 🙂

OTHER POSTS YOU MAY FIND OF INTEREST:  THE DEATH OF MARRIAGE / PSYCHO / STEALING YOUR IDENTITY IS EASY / THE INTRUDERS / HAVE YOU SURRENDERED YOUR PRIVACY?