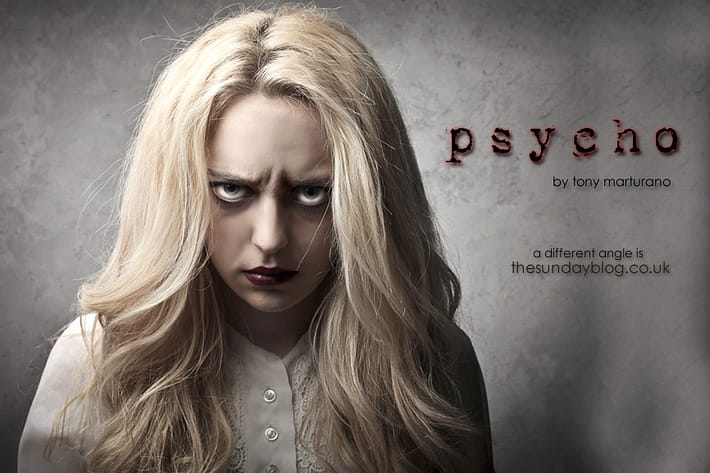 “Each and every one of us has, at some time in our life, wished harm on somebody else yet the majority of us have inbuilt social inhibitors that block  us from acting on that impulse. The psychopath has no such restriction.”

If I said the word psycho to you, what images would it conjure up; an axe wielding maniac, somebody you think is a bit unbalanced or Anthony Perkins donning his mother’s curtains?

How about your boss?

“My boss?” You’ll be asking yourself.  “He may have a rant from time to time but does that make him a psycho”?

Many of us bandy the word ‘ psycho’ around almost daily to describe individuals who either appear irrational or have behaved somewhat abnormally but  what is the real meaning of the word psychopath and what exactly is our fascination with them?

Most of us associate the word psychopath with movie characters such as Norman Bates, from Psycho, Dexter Morgan from the hugely successful series Dexter, and other infamous characters like Doctor Lecter from Silence of

the Lambs. Each of these mythical characters owes their existence to real life people, such as Ted Bundy, Jeffrey Dahmer, The Wests (Frederick & Rosemary), Harold Shipman, Peter Sutcliffe (The Yorkshire Ripper) and, of course, history’s most infamous of British serial killers, Jack.

Ironically, whilst notorious, none of the above is the name of the world’s most prolific serial killer, his name is Luis Garavito. Garavito (also known as The Beast) is from Columbia and was convicted for the murder of 138 people but is believed to have taken the lives of over 400.

We’re conditioned, in life or in the movies, to fear the psychopath because they are evil beings hell bent only on causing harm, and that’s a fact yet we struggle with the concept that they are victims themselves; of mental illness and their environment and thus unable to control both their compulsions and the need to act out on them.

Each and every one of us has, at some time in our life, wished harm on somebody else  (as least in anger)  yet the majority of us have inbuilt  social inhibitors that block  us from acting on that impulse. The psychopath has no such restriction. It’s this very thing that we, as spectators, find so curious about a fellow human being who, unlike us, is able to function free from moral constraint and, despite some of the most stomach turning acts, appears unaffected by emotional turmoil and or remorse.

Something so dysfunctional in a seemingly civilised society seldom fails to fascinate as much as it horrifies.

‘Moral Depravity’ or ‘Moral Insanity’ are terms used by doctors as early as the 1800s to describe behaviour of some mental patients who appeared outwardly ‘normal’ yet lacked a sense of ethical comportment and a disinterest in the rights of other human beings.  The term psychopath was first attributed to these people around 1900. It spawned the iteration ‘Sociopath’ in the 1930s to highlight the damage that Psychopaths caused to society. Today, the term Psychopath  is used to describe individuals suffering serious disorders, linked to genetic traits whilst sociopath is used more to refer to less dangerous subjects who are seen more as the product of their environment.  That said, some researchers make distinction between ‘primary’ psychopaths; believed to be genetically caused, and ‘secondary’ psychopaths; seen as more products of their environment.

Regardless of how different their lives may be,  psychopaths have key shocking similarities. No matter what country, ethnicity, race, socioeconomic background, education, familial background, each and every one of them will manifest the following traits:

Careful, just because somebody has a bad attitude and a few of the above traits, it doesn’t make them a psychopath but more of an irritant. The two I’m sure you’ll appreciate are clear and distinct.

On the other hand, if you’re unable to draw a conclusion based solely on character traits, fear not, researchers have actually come up with a way of identifying potential psychopathic tendencies in teenagers with the use of brain scans or, more specifically, Functional Magnetic Resonance Imaging (FMRI).

FMRI is able to detect which parts of the brain respond to stimulus. Researchers used it to conduct tests on 37 young men with serious antisocial traits, such as inflicting harm on others, dishonesty and jealousy. They then showed each and every boy a series of photos, one hundred and ninety two in total, of hands and feet that were in or about to be in potentially painful situations (such as fingers next to knives, feet on broken glass) and discovered that the brain activity of the subjects showed reduced activity in the anterior cingulate cortex and in the insula, both of which are critical to empathy. And thus, with lower levels of empathy, these boys were less responsive to the pain of others. Researchers believe that this and other similar traits are the roots of psychopathy. They also believe that it is possible to alter a child’s psychological course with early intervention. “Our findings indicate that children with conduct problems have an atypical brain response to seeing other people in pain,” says Professor Viding of University College London, who co-authored the report. “It is important to view these findings as an indicator of early vulnerability, rather than biological destiny. We know that children can be very responsive to interventions, and the challenge is to make those interventions even better, so that we can really help the children, their families, and their wider social environment.”

So, some of you a probably asking yourself what on earth any of this has to do with your boss. Well, according to several studies around the world, people with psychopathic tendencies are four times more likely to be found in the boardroom.

Today’s corporate executive psycho is cunning, manipulative and is drawn to powerful positions; they enjoy and are very good at playing mind games with other people without them noticing, certainly not before it’s too late. They’ll use key psychopathic traits to charm would be business partners and colleagues with charisma and, where necessary, hollow truths in order to achieve their goal. They’ll lie without remorse and have no qualms about taking credit for somebody else’s work nor will they hesitate to deflect and project blame if necessary.  They’ll have casual intimate relationships whilst fostering superficial friendships. They’re easily bored and as a consequence likely to take risks without concern for consequence and or ramifications, especially those affecting others.

British researcher, Clive Boddy, actually believes that the 2007-2008 financial crisis may have happened because of the growing proliferation of psychopathic personalities in executive offices. “If you worked at a company over the course of 20 or 30 years, people got to know what you’re like, how they treat people, regardless of how you appeared in an interview,” said Boddy, whose “Corporate Psychopaths Theory of the Global Financial Crisis” was recently published in the Journal of Business Ethics, “Obviously these days, as people move job to job every two or three years, that’s not possible anymore.”  A 2010 paper co-authored by Boddy found that 4% of senior managers displayed psychopathic tendencies, up from the 1% that researchers say could normally be found in society.

There’s a bit of psycho in all of us but especially those in power but this isn’t necessarily a bad thing. Far from it, some researchers believe that psychos make successful companies, something that is being dubbed the ‘psycho path to success’.  It’s based on the theory that those in power need the ability to be able to make decisions free from moral constraints and a concern for the welfare of others. For example, a struggling company will often have but two options; increase profits somehow or deploy a radical cost cutting exercises. One of the most common and logical places to start tends to be in human resources.  A good senior executive is able to impartially assess staffing versus actual need objectively and without compassion; he does what needs to be done for the survival of the company. If the executive starts sympathising with and thus humanising Bob who works in the warehouse who has two children and a pregnant wife to feed, there’s a distinct possibility that he’ll struggle with taking appropriate action that is best for the company. Yet, an executive who is devoid of emotional weakness and incapable of sympathy or empathy is more inclined to take swift and decisive action, most likely to benefit of all that remain. And, as unpalatable as that may seem, that’s the kind of person you’ll want at the head of your company when it comes to crunch time, the choice between the company’s and, by association, your job’s survival.  Similarly, psychopaths are risk takers, they often take action without regard for consequence; these are the entrepreneurs who take big risks in the gamble to achieve big rewards.

“People tend to think of psychopaths as criminals. Yet the majority of psychopaths aren’t criminals,” said Dr Robert D Hare, a leading researcher of psychopathy who consults with the FBI and even helped actress Nicole Kidman prepare for her role in the film ‘Malice’. Hare also developed the first diagnostic test for the psychopathic mental disorder in 1980. “They [psychopaths] don’t go out and maim, rob and rape but find other ways to satisfy themselves without doing something necessarily illegal… such as taking risks with someone else’s property or money.”

So, the research points to one thing; thinking of a psychopath solely as a killer or a criminal is a mistake. These ‘disturbed’ individuals may be the stuff of nightmares but they’re most likely responsible for building the world as we know it.  I have to say that I’m surprised I didn’t reach this logical conclusion previously, before conducting this research, since I’ve always believed creative people to be partially psycho, something I put down as a necessary trade off in return for their genius.

Have a fright free Sunday. 🙂

“We serial killers are your sons, we are your husbands, we are everywhere. “ – Ted Bundy

BEHIND THE SCENES AT ADA.  I’d like to apologise to some of you early birds who eagerly await posts and start reading the moment they appear on the site. You may find that some articles contain  typos.

This happens because, despite starting on a Saturday and getting up early on a Sunday morning, I still have to work fast to get the blog post written  and out in time for the early morning read.

Since the success of ADA is attributed to its early morning audience (this is when most hits to the site occur simultaneously), I understand the importance of ensuring posts appear online, in inboxes and on Facebook generally before 09:00. And sometimes, in my haste, I may miss the odd slip of the finger.  However, you’ll be pleased to know that part of my process is to go through and re proof articles post publication.  I appreciate that this is somewhat unorthodox but I’m confident that you now understand that there’s method to my madness. So I’d like to thank the thousands of you who take the time to read my articles and to the few who are kind enough to provide feedback and that other minority group whose reading pleasure may be spoilt by the odd ‘tart’ instead of ‘art’.