CASA BELLA’S CASINO IS A WINNER 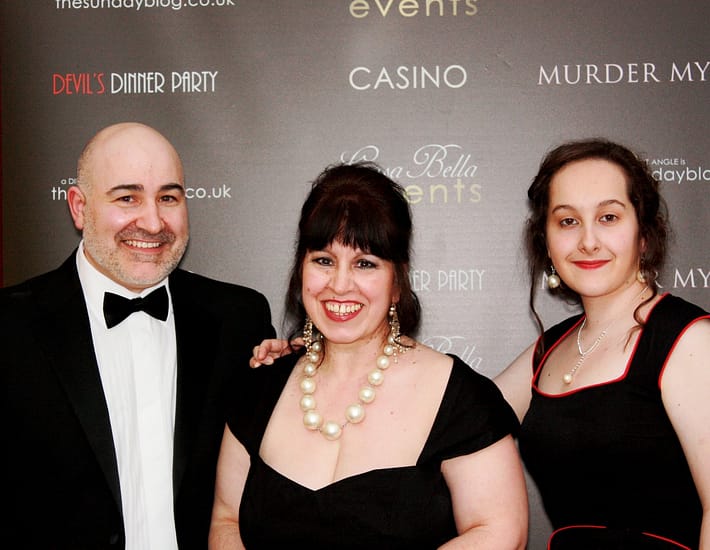 “I think the best thing about the evening (although it may not necessarily have seemed so at the time!) was the noisy, raucous behaviour of all our guests.”

Have you missed me?

Of course you have… not only  have you missed your Sunday morning read but you’ve also been dying to hear all about Casa Bella’s Casino that took place on the 9th March 2013.

Well, fear not, I’ve just returned from a well deserved break on the English Riviera  and am ready and eager to dish all on what, I’m happy to report, turned out to be another successful Casa Bella event, even more so in my mind since I know that work commitments ensured that this event, like some before it, didn’t receive the required preparatory period I’d normally like. 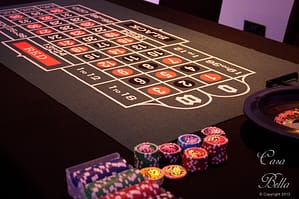 The theme for Casa Bella’s Casino is exactly as the name suggests; we transformed our events room into a Casino with 3 tables; Black Jack, Roulette and CRAPS.

Upon arrival, each guest was handed a glass of fizz as well as a  black or red pouch filled with real Casino chips worth approximately £13,000  with which to amass their fortune at either of the tables manned by Casa Bella croupiers, hand picked not only for their ability to manage  the table but also for, uh hum, other attributes which proved very popular with our female guests.  😉

And the side table thrills were accentuated further by the addition of a new butler to the Casa Bella crew, Steven Hall,  who worked tirelessly all evening to ensure everybody was well fed and watered.  Considering this was Steven’s first assignment as a Casa Bella butler, he did remarkably well.  And there’s no doubt that he’s  ‘smile’ and happy disposition proved very popular with all, especially the ladies, and there’s no doubt that he’ll be invited back to join the Casa Bella crew at the next event. Another addition to the team was Alex Cooper who turned out to be a natural croupier at the Black Jack table and, whilst I didn’t get to spend much time with him,  reports from guests were certainly very complimentary so there’s a distinct possibility that we’ll be seeing more of Alex.

Casa Bella’s Casino was a departure from our usual five course, home made food served to table, we opted instead for finger food served on a series of silver platters at regular intervals throughout the evening, along with an abundance of beverages. This was indeed in complete contrast to the usual Casa Bella experience but we felt would better enable all of us to fully engage with our guests as well as the evening’s proceedings, especially since yours truly found himself doubling as a croupier on the CRAPS table. Fear not, I stopped short of removing my shirt as it was quite important to me that our guests would want to return to the next event!

The evening also saw the addition of two new guests;  Heidi Crisp Sharp and Gaynor Bill both of whom had been hoping for a ‘golden ticket’ to a Casa Bella event for some time.  Needless to say, that not only did both ladies look every bit as glamorous as their counterparts but fit very well into the Casa Bella tradition by adding not just beauty but all important character and laughter to the evening’s proceedings, and will certainly be re-added to the guest/waiting list for future events.

So as to ensure  that everybody received equal amount of time at each table, we introduced a ‘speed dating’ style twist to the evening; gamblers would have 30 minutes to win as much as they could at each table before moving onto the next,  although this method was soon abandoned when guests became ‘hooked’ on specific games and opted instead to spend most of the evening at the same table.  This was a natural change to the rule that worked well with everyone.

All was  a clear winning formula for my niece, Anna Pratt, who revealed herself as an astute natural at the Roulette table, out gambling all of the other guests to win a grand total that exceeded £40,000! (in chips of course!) which won her a  real and somewhat coveted Amazon voucher.  Well done, Anna!  Remind me to plan our next Vacation in Vegas!

As with all Casa Bella events, there were the usual ‘drop outs’ and last minute changes to the guest list but I’m happy to say that, given the theme, this did not have a major impact on the evening’s  proceedings.

And of course, whilst it was all alright on the night,  the build up didn’t go without the usual preamble drama, such as being sold just half of a canister of helium with which to inflate the balloons that were supposed to smother the whole ceiling, forcing me instead to just feature a grand total of six balloons ultimately tied into clumps of 3. And there were the usual  technical glitches which I won’t bore you with as these all now pale into insignificance given the evening turnout.

All things considered, I couldn’t have wished for a better evening. It seemed that all of our guests, including me, enjoyed a night at the Casino but I have to say that the highlight of the evening for me had to be (although it may not necessarily have seemed so at the time!) the noisy, raucous behaviour of all of guests. It became very clear to me very quickly, both from the whooping, hollering and the laughter that each and everyone of our specially selected friends were enjoying themselves, and it was this (not the Rat Pack we had crooning in the background) that was  music to my ears because it embodied precisely what Casa Bella is all about. We invest both time and money in each of our events to ensure that they remain a unique experience facilitating the making of new and joyful memories.

Many ideas have been floated for the next event but no idea has been agreed on or date set so, until then, we’ll just enjoy some of the pictures from what proved to be yetanother fantastic evening.

See you next week for another hard hitting aDA topic.

Have an entertaining Sunday 🙂