From the couch of The Chrissy B TV Show

Posted by Tony Marturano on November 13, 2012 in writing

Well, to say that last night was somewhat surreal would be an understatement but I guess that’s more because one minute I was in London on the telly 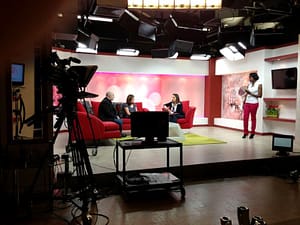 and the next I was back home in good ole’ green Cambridgeshire.

You’ll be proud to read that yours truly wasn’t that nervous, at least not until they started affixing the mic on (or under my shirt), we started walking through corridors until we emerged into a brightly lit set.  It was at that moment that I thought, blimey, this is for real, these people actually want me to sit here and give my opinion on perfectionism, as if somebody like me would know anything about that! 😉

So, it wasn’t long before Mr stage manager started counting down from 10 and the theme tune started playing and my nerves really did kick in

5 seconds… what if I freeze?

4 seconds….what if they ask a question and I start stuttering?

3 seconds….remember to sit up straight.

2 seconds…do I look fat in this? 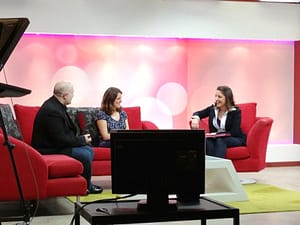 Chrissy introduced the show and  it was literally show time…

And that was it… everything just flowed.  I just remembered everything I told myself before even getting to the  show; do not look into the camera, do not fidget, do not interrupt although you may feel compelled to (as it happens I didn’t feel compelled to).

And that was it…each question just rolled off and, as expected, it was just like having a chat with you guys on here and family and friends. We chose a subject, we chatted about it and it just so happened that a whole camera crew was filming it and beaming it into the homes of many and my friend was actually grinning at me from behind the cameras.

Whilst he was there,  he snapped a few photos which I’m sharing with you now. I hope you like them.

The show was a great experience and there was a statement from the producer that she would like to invite me back at some stage. This remains to be seen.

In the meantime, one thing is for sure, if you readers didn’t visit adifferent  angle on a regular basis, I probably wouldn’t write with such regularity either so it’s ultimately thanks to you that I had such a wonderful evening.

So thank you so much for stopping by each day, week… and remember, if you love a Different Angle as much as it loves you, please be sure to share with your family, friends and acquaintances. 🙂