THE BINQUISITION; Failing to declare will result in a fine and possible execution!

My dearest readers, it is with great regret that I find myself writing the last blog post for what may be a very long time. That’s right, I’ve sinned and there’s a distinct possibility that I may be arrested and carted off to the nearest prison.

What have I done?

Why, I failed to adequately sort my recyclable garbage from my general household waste of course.  Yep,  and my refuse collector, technicians ( or 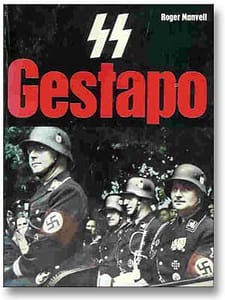 So,  I was tagged! that’s right, for my crime, my wheelie bins were orphaned, abandoned on the side of the road and slapped with two cardboard tags, each sporting angry black gashes in the relevant check box, informing my dumb ass what exactly I had to done to displease the garbage gods; my rubbish contained black refuse sacks!

I remember, as a child, spending some time with  my aunty and cousins on their farm just a few miles outside  a small village in the south of Italy. During that time I learned, not unlike something reminiscent of Ann Frank’s diary, that it paid to grease the palm of local authority from time  with the odd chicken or lamb. Such blatant bribery wasn’t uncommon back then and most likely isn’t still now but little did I know that I may have to resort to the same practice just to get my bins emptied on a weekly basis, because the terror of being left with the fermenting fruits of my gluttonous existence to fester for an extra week is simply unbearable!

Okay,  so maybe I’m trivialising a very serious issue (am I?) but come on, Draconian truck warriors, don’t you think you should lighten up just a tad? After all, you’d already branded those poor wheelie bins with your black mark.  Surely it would have been much more community spirited if you’d left your mark , you know, a bit like Zorro,  as a warning for next time but at least lifted the contents this time. No?   Is it really going to take the odd sacrificial chicken every now and then?

I guess things could be worse, I could be a ‘subject’ of  Darlington Borough Council whom have proudly decreed that they’ll slap a fine on any impudent who might put his or her rubbish out on the wrong day of the week or ‘too early’.  That’s right, rubbish must be put out a maximum of 2 hours before collection on the day of collection. After all, nobody wants to see those ghastly wheelie bins for a few minutes longer than they need to, do they?

I guess those sheriffs are still smarting from the fact that, earlier this year, the government banned local councils from imposing fines, sometimes in excess of  £1,000, on residents who unwittingly placed the wrong type of garbage in the wrong receptacle. The penalties were scrapped when it was found that they exceeded those imposed for shoplifting and other similar crimes.  Blimey, there’s me thinking that local authorities wanted to be seen as ‘supportive’ and ‘encouraging’ of people to recycle correctly, I didn’t realise we paid them over a thousand pounds a year in council tax to bully us. 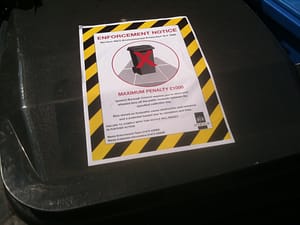 This new Orwellian state goes hand in hand with the ever growing number of CCTV on many street corners, or the prolific  use of mobile devices. Now, it doesn’t matter where you are, there’s a distinct possibly that you’re being watched, either by a local authority sponsored eye in the sky, the lens of a stranger or even the  back boring eyes of your neighbour as they consider that lid on your bin which is conspicuously pointing skywards, indicating, shock of all horrors, that you you’ve ‘overfilled’!  That’s right, don’t even bother casually leaning against it in an effort to push the contents in, you know you’ve already tried to do that, and it’s too late anyway, your friendly neighbourhood ‘collaborator’ is already dialling the local authorities to report you before you even have a chance to wash your hands.

We all know  the importance of recycling. God knows we’ve had it brain washed into us for years. And, there’s no doubt that, but for the few who have made it their life’s ambition to educate the rest of us ‘green ignoramuses’, we’d all now be wallowing in landfill. By the few, I’m also referring to those greens (yes you know who you are) who work tirelessly for the green cause by regularly visiting their neighbours and educating them on the importance of joining the green alliance and subtly pointing out to them that residence will be met with austere measures.

Sorry.  The story just sounds so familiar and I keep veering towards it.

The reality is that our landfills are, well, full, the ozone layer is still, well, thin, although we don’t hear that much about it these days, I guess it has gone a bit out of fashion since there’s only so long you can bang on about ‘a hole’. Regardless, studies do show that 60% to 75% of garbage in landfills can be recycled. That means that if everybody recycled, we’d have 60% to 75% less garbage in them craters which means we’d need that much less land for garbage disposal.  And when considered from that perspective most people will feel inclined to do something about it. But there are ways and ‘ways’ of getting people to join your cause.  I’m not sure giving the refuse Gestapo unilateral powers not to do their job whilst imposing additional fines on bonifide tax payers is it.

But you can be the judge of that.