And so here we are, 2 days later (sounds like a film title doesn’t it).

The balloons have been deflated, the posters taken down, the jewels stolen and Casa Bella’s dining room returned to its usual state in anticipation of tomorrow’s formal business meeting. Casa Bella’s first Murder Mystery is over so what was it like?

When somebody asks me that question my first answer is BIG! Big anticipation, big fun, big outfits, big wigs, big laughs and big boobs! Oh, and some murder. Yes, this event, more than its predecessors, had all of the perfect ingredients for a fantastic evening and has got to be right up there with one of the best ever, but it wasn’t without its challenges. 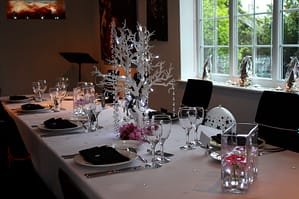 Casa Bella’s Murder Mystery has been months in the planning, and by months, I don’t just mean the usual 3 months to plan the evening, prepare guest packs, plan the theme, source the props and design a menu but it’d already been postponed by an additional 2 months to make way for Casa Bella’s Devil’s Dinner Party. So you can imagine my horror when on the Tuesday before the Saturday event the main character (and victim for the evening) called to tell me that he could not attend as he had other plans hundreds of miles across the world and they clashed.

Now, normally, I’d just ‘adapt and overcome’ however, on this occasion, it wasn’t that easy because I couldn’t see an easy way of finding somebody in days who was willing to play the compulsory character and, um, die! At first, my lovely niece came up with the concept of dressing as a man. I actually considered the suggestion for a while but when I thought about it, I just couldn’t. The character is based on Pamela Anderson’s ex, rocker hubby Tommy Lee.  Now, if anybody has seen that man, you’ll know that a pretty 17 year old girl with a drawn on moustache, and a wig (that looked like a prop from the Psycho film set) simply wasn’t going to cut the mustard.  No, there was only one thing for it; I’d have to cancel the event.

It was Wednesday and I was just trying to work out how I was going to deliver the news to the guests, many of which, I knew were really looking forward to it. But then my sister and I came up with a somewhat radical idea. Why not hire an actor?  Okay, so maybe that would have been a tad OTT but we had the next best thing. I’d already rehired one of the butlers from Casa Bella’s Devil’s Dinner party whom we all liked very much, and I knew Lee was the kind of guy who would turn his hand to most things if he could, so I made contact, gave him a the brief and warned him that he’d have to fly a bit by the seat of his pants and, well, follow my lead as we’d have to pretty much make some of it up as we went along.  Lee’s answer, ‘be happy to help if he could’. We were back in business!

So, I deleted the guest message that I’d already started to draft and instead turned my fingers to a full evening’s brief for the man who was not only going to be our butler for the evening but was also going to mingle as a dinner companion, a character and a victim!

And so, disaster averted, the show really went on.  Saturday came and although still somewhat disappointed that my best friend was unable to

make the event, I donned my costume (third time lucky, the first two did not fit!) and transformed myself into JonVolta who was clearly modelled on the famous John Travolta although, with wig, I ended up looking more like Elvis (in his worse and plumpier years).

Some of the room decorations didn’t quite go to plan. E.g. the fact that I wanted to line up popcorn bags along the windows (with lights in them) for that ‘screen’ feel but the miserable gits at Cineworld told me that they wouldn’t give nor sell the empty bags to me as they were part ‘of stock’.  They did, however, very kindly give me permission to buy the bags for £3 something each as long as they were filled with popcorn!   Needless to say, I politely declined; if I wanted to surround myself with bags of stale popcorn, I would have visited them sooner. It was too late to buy the bags I wanted online so we ended up instead with a mad dash to the local store for bags of another well known brand instead. Also, the self-illuminating balloons I bought along with a canister of helium decided not to play ball either; the balloons kept on descending back to earth too soon! Online reviews confirmed this was a common defect so, in the end, I had to leave inflating the balloons to the last possible moment, and they just about made it to dinner before kamikazeing themselves onto the dining table and surrounding area.

So,  19:30 arrived as did all of our guests, wearing some hilarious costumes and some wonderful smiles. None knew what to expect from a murder mystery but they all dove into the spirit of the evening, and whilst all of the Casa Bella events have been fun, I don’t think any have been as hilarious, especially when I announced the SKITS.

The skits were a diversion from the main theme of the evening (the murder). Guests were grouped and given clues (or a premise) upon which to base their idea for a SKIT to last no longer than 2 minutes.  Much to my delight, everybody jumped into the spirit of things, and if you want to see a smidgen of what I’m talking about, check out some segments (and the laughter) on Casa Bella’s YouTube channel and click on the ‘Sausage Trailer.

MATTHEW AINSLIE was on top form as the pirate, Capn’ Jack, AKA the character Donnie Jepp. Not only did his costume look excellent but Matt played the character brilliantly, both in the SKIT and overall and it’s probably why he went on to win the trophy for BEST COSTUME. Well done, Matt! At last, well deserved recognition for all your hard work. Matt was also the only guest to correctly guess who murdered poor Tommy Pea. ‘.

The star of the evening though had to be our butler, LEE DIDDI, who replaced Tom Payne in the role of arrogant rocker, Tommy Pea. Lee looked every part the manly superstar but also go into touch with his feminine side when he played a camp reader on a visit to the local library in search of ‘feminine’ books. Lee won himself and the rest of his group, ANNA PRATT AND COLIN DARRINGTON, the coveted trophy for BEST SKIT. Well done!  And, of course, when he wasn’t’ doing that, he also adopted the role of ghost for the evening for it was TOMMY PEA’S character who was murdered. Lee had the dining room in f
its of laughter when he returned at the appropriate time smeared in white make up, wearing a T shirt stating ‘I’ve just been murdered at Casa Bella and all I got was this lousy T shirt’ and holding up a sign informing everybody that they had murdered him. Lee then proceeded to spend what was left of the evening as a ‘mute ghost’. Quite handy really, considering that, since his arrival, did not abandon his primary duty which was to assist with serving my sister’s delicious food as well as ensuring that we were very well taken care of and watered for the evening. Hats off to you, Lee, you really earned your money and maybe even a place on our white list.  😉

So, all’s well that ends well.  Casa Bella successfully managed its latest event despite some challenges, and I, for

one, am delighted with the result.  I embarked on the murder mystery concept with some trepidation for I knew that many of the assembled guests had not attended one before which meant that the outcome but truly unknown. However, they stayed true to their briefs which were to forget about acting and focus only delivering clues and, primarily, on having a good time. They did not disappoint, joining in on the spirit of the evening and hilariously ‘shining’ in their respective characters.

So my wish came true and hopefully so will those made by our guests on the evening, thanks to Casa Bella’s wishing tree. I wanted something a bit quirky to adorn the table this time, that’s why I opted for a variation of the traditional wedding tree and instead affectionately dubbed ours, ‘the wishing’ tree, the branches of which were bejewelled with miniature jars of angel dust, each colour representing a different wish for the girls as they plucked it from the tree. The wish is then renewed each time the angel (glitter) is applied to their body. For the men, there were Italian bracelets symbolising the same, each time they are worn.

If I’m totally honest, based on some of the challenges of organising this event, I wasn’t in a hurry to host another Casa Bella experience any time soon because I had lost the belief that the energy to plan, the drive to innovate and the will to overcome more setbacks outweighs the rewards but all friends on Saturday night (old and new, because there were a couple of new ones) reminded me exactly why I do make the effort; it’s all for those important people that orbit my world.  Each and every one of them brings me something new, be it a kind word to remind me I am loved, a comforting shoulder when I’m not at my best, a belly shaking laugh when it’s most needed or even a life lesson or two when I least expect it,  these people make my life what it is. To have the opportunity to share my existence on this earth with them, to create memories, is to be blessed and something that should be appreciated as often as possible.

Right now, I don’t know if and when the next Casa Bella event will take place but I comfort myself with the fact that those who matter have already received and accepted their invite to the next major event of 2012 due to take place in June; the rebranding of my company, CGA Enterprise Solutions. The gala evening will be worthy of a Casa Bella experience and will mark a major milestone in my life, but the most beautiful part is that those people who orbit my world will be there to make the memory with me and, in the final analysis that’s all that matters.