So, what do Devils, semi naked men and a lot of scandalous revelations all have in common?

Give up? Why, Casa Bella’s Devil’s Dinner Party of course! 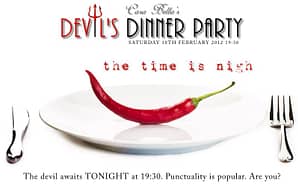 Yes, it’s just a week after the event and my legs are only just recovering from the ordeal since what started out as a dinner party for friends turned into a major stage production, of the likes I haven’t produced in over a decade.

Casa Bella’s Devil’s Dinner Party, based on ITV Studio’s production for Sky Atlantic, featured a dinner party for friends and family but with a wicked twist; me as the devil asking some intimate, thought provoking and sometimes moral dilemma type questions. Each and every guest had a chance to sit in ‘the chair’ where a preprinted question on a card awaited them. The rest of the group had to correctly guess the answer based solely on what they knew or had learned about that person. Correctly guess the answer and they’d collectively add £10 for the ‘Devil’s Purse’ . The total amount accrued throughout the evening would then become the prize for the guest voted ‘most popular’ by all other guests. Needless to say that much was learned about all those convened!

As if the above above wasn’t sensational enough,  I decided to go one step further for this event and actually hire a pair of topless waiters! My 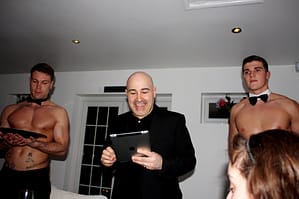 motivation (apart from the fact that I fancied a pair of good looking ‘devil’s helpers’ for the evening) was to see the look on the face of ours guests when the door was opened to them by a paragon of physical fitness minus his top! Of course, it had the desired effect and more. Even whilst ensconced in my room ( as the devil I was unable to consort with any of the guests on the evening), I could hear cries of surprise and sighs of approval. Although, what started out as just a bit of fun (and eye candy) turned into welcome helping hands. The boys were very professional and clearly had done this job many times before. They easily slipped into their roles as butlers for the evening, tendering to our guests, me and the dirty dishes in the kitchen! Hiring them (although I wasn’t sure at the time) was one of my best decisions, as the evening turned out to be quite hard to stage with an immense array of logistical actions; cards on stage, cards off, music on, music off, lights up, lights down, dishes in, dishes out, and so on! There’s no doubt that, for me, the evening went from dinner party to a stage production, and my legs certainly didn’t enjoy all the standing around, hence  why I’d like to take a moment to express my deepest admiration and respect for all of you whose profession calls for much time on your feet!

That said, I am content that the evening appeared to be well received, with everybody getting into the spirit of things, to the point where, once started on a topic, not even the devil’s presence could stop the assembled guest’s debate, not even my deepest bellowing in my most guttural voice would scare them into silence (they obviously haven’t seen me angry).  Secretly, I was happy; to me, there’s always been a certain sense of satisfaction at being the point of origin for a debate that really gets people talking, and when it includes the psychological element of getting to know each other then it’s even better.

I did miss not being able to mingle with friends/guests throughout the evening though. It was somewhat strange to see them all assembled but not be able to join them as me (for I was playing the role of Antonio, The Devil), at least not until the end of the evening when all questions were asked and the vote for ‘most popular guest’ had taken place.

Speaking of which,  I was hoping that the results of the voting process this time might have turned out differently but, unsurprisingly, it did not, and I found myself recounting the voting forms but it was true; the guest voted ‘most popular’ and winner of the Devil’s purse (£50, out of a potential £130) was none other than my good friend, Mr Thomas Payne who took well to accentuating his everyday role of charmer and was quite blatantly seen ‘working’ the table throughout the evening. Tom’s charms were closely followed by friend and neighbour, Trevor Bartlett, who was second, and my lovely niece, Anna Pratt, who took 3rd place!

Although I guess the real drama of the evening came with my most poisonous question; one guest (in the actual words I used on the night) “like Judas in the garden of Gethsemane will turn traitor”, and indeed she did. My beloved Sandra Taylor-Wix was unlucky enough to select the ‘marked’ card which meant she had to publicly identify her most favourite and her least favourite guest of the evening. It was an agonising moment for Sandra who could feel the breath of the devil on her as she was pushed to make a decision. Eventually, she identified her close friend, my beloved sister, Francesca Marturano-Pratt as her least favourite guest (yes you can imagine how that went down) but  Sandra had played a tactical move knowing that her good friend would forgive her (eventually) whilst somebody else (in the true spirit of the game) may have seen her ‘differently’.  And so it was, by Sandra’s vote, Francesca became ineligible to win the Devil’s Purse.  However, I wasn’t quite done with them yet. Before the night was over, the tables were turned again,  when the devil (AKA me) gave Francesca a choice, I presented her with a sealed envelope, explaining that it contained a ‘gift’ or a ‘curse’. As the evicted guest, Francesca had a choice to take the envelope or pass it onto Sandra. Francesca chose to keep the envelope and naturally breathed a sigh of relief when it turned out to be a £20 Amazon gift voucher.

So, all’s well that ends well. Indeed, everybody appeared to have fun and, as always, love the food that was, this time, lovingly served by our

topless butlers which, if Francesca has any say, will most likely make a reappearance at one of our next events, interestingly I believe it’s their ability to clear up and wash dishes and not their looks that may be her motivation. 😉

I, on the other hand,  was glad for the help ‘back stage’ but most importantly that we managed to pull off yet another Casa Bella event, probably one of the most ambitious? And yes, I know that I say that most of the time but I guess that’s because each one brings its own challenges. This one, more so because I don’t believe buying a new company and trying to ‘stage’ a dinner party event are compatible. Indeed, I went into this party with some trepidation for I knew it had not received the same level of attention as most of the other dinner parties. I really struggled ‘learning my lines’, in fact, I would say that it would have been safer simply to edit my whole script and replace most words for that ever useful F one. God (or should that be my niece and my sister?) knows, I used it enough times during rehearsals. 😉

There are way too many photos but if you’re interested in seeing more, then visit and LIKE Casa Bella’s Facebook page and, who knows, next time, it could be you!