Do you know ‘the lady of the fridge’?

Posted by Tony Marturano on June 5, 2011 in Photography, writing |2 Comments

A few years ago, I published the December edition of a Different Angle magazine. It featured an amply proportioned lady in her underwear as she 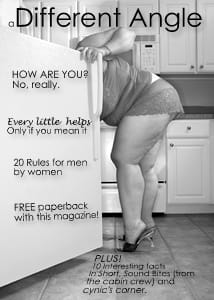 rummaged through the refrigerator. Remember it? Well,  it’s the front cover to the right. (those Facebook readers will have seen a Facebook censored version. Yes, believe it or not, they don’t like women in their underwear! Yes I know you’ve seen worse but, hey, that’s just how it is). The image was supposed to be reminiscent of Christmas and how, with the best restraint in the world, most of us overindulge.

That edition received an unprecedented flurry of emails. As an editor, I couldn’t have been happier; readers were connecting with the magazine cover and were loving the image; they wanted to know the identity of ‘the lady of the fridge’ and, before long,  my SISTER started  receiving her own fan-email.

That’s right, people were thinking that the image was of her!  I have to confess, I thought the whole thing was hilarious. That was until she started receiving emails  from people she hadn’t spoken to in years, all congratulating her on her new found fame. To compound the issue, we still owned a grocery store back then so you can imagine Francesca’s bemusement when they all greeted her with a wry smile as they collected their morning paper. She said,  “The whole thing was quite funny at first. That was until it continued into the next day, the next week! I wouldn’t have minded but I wouldn’t be seen dead in that kitchen, and those kitten heels!”

I was even ‘forced’ to write a statement in my next publication, confirming that the ‘lady of the fridge’ was not my sister, that her identity was unknown, and that it was simply an image that I liked and purchased.

The location was my home. Our famous dining room to be exact which had, on this occasion, been transformed into a makeshift studio.

My models varied in age. We had a twenty something year old spring chicken who’d look good even be

draggled by that proverbial bush backwards, and  two other ladies  in the ‘prime’ of their life. One of them was my sister.  The purpose of the  photoshoot was to take some pictures of the twenty something year old (sorry, I’m not allowed to use her name as she’s probably still in bed as I write this and I’m not sure she’d want me publishing her name for professional reasons. Um, it wouldn’t  matter how I wrote that it would still sound wrong) for her website and Francesca simply wanted some pictures of her and her friend in various outfits for fun (and their Facebook profiles, I bet). 😉

So, to be perfectly honest, I went into the photoshoot thinking that things might be slightly ‘easier’  with a twenty something girl but perhaps not as ‘easy’ with my lovely, more mature, sister and her gorgeous friend.  Well, I could never have been more mistaken; the day flew by. All of the girls looked fantastic and were a joy to work with. “I’ve had a fantastic day. It was a real confidence booster” said my sister’s friend.

But the reality is that, many years ago, I used to work as a semi professional photographer but this passion took a back seat to my true passion (writing, of course) and has remained somewhat dormant until now.  It’s a great feeling to know that, after all these years, I’m still able to frame a decent photo and I’m seriously considering reprising that roll (with any spare time I can find), all I need now is to choose my subjects. 😉