Are you stepping up to your responsibilities?

Posted by Tony Marturano on May 31, 2011 in writing |No Comments

“…for some, this is the necessity to work for a living and then make the most of what little social life they have left. For others, it’s their amoral abuse of the welfare state…”

The other day I was reading an article about teenagers who apparently are not getting enough sleep due to an increasing number of electrical distractions in their bedrooms, such as MP3 players, mobile phones, TVs etcetera. Apparently, more than a quarter of the thousand 12 to 16 year olds surveyed admitted falling asleep either watching TV, listening to music or with other equipment still running. A third said that they slept, on average, for 4 to 7 hours per night. Experts recommend eight. 40% of those surveyed said they were often tired during the day whilst only 10% placed importance on a good night’s sleep. 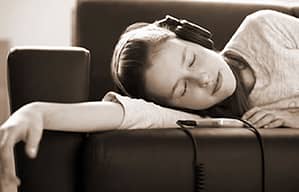 This worrying news, known as ‘junk sleeping’; sleep that is neither the length nor quality that it should be in order to feed the brain with the quality of rest it needs, appears to be on the increase and the stern advice is that children be educated as to the importance of sleep. Now, I ask you, is this really news to you?

It’s understood that our society is changing and my mother doesn’t hesitate in reminding me that, when she was a child, she was lucky to have food on the table. It’s no mystery that a good night’s sleep is important to all of us and not just our children. If you were to read the article at face value, it would be easy to mistake technology as the new villain of our modern age but isn’t this the usual case of moderation? “You can have too much of a good thing” becomes synonymous with “you’ve been watching TV for too long and now it’s time for bed.

I’m a self confessed gadget freak but it doesn’t matter how nifty these things may get, there’s always one thing that tells me when enough is enough, and that’s my  common sense. It’s a parent’s responsibility to look out for the well being of a child, whether that be ensuring a good night’s sleep or helping them develop with a basic moral foundation that enables them to get the best out of life. Good parenting is not allowing them to spend an extraordinary amount of time with the electronic babysitter or allowing them to roam the streets after the watershed just to get some peace after a hard day at work.

In a world where ‘instant messaging’, ‘instant credit, ‘fast food’ and ‘24 hour shopping’ are king, you would have thought that each of us would have copious amounts of free time but do we? How many people do you know have actually confessed to reaping the excess of free time that instant gratification has afforded us? How many do you know that, as a direct consequence of this, are relying less on the electronic nanny and are opting instead to spend quality time with their children?

There’s no doubt that some parents are fighting back, determined to repossess their role from the invader gadgets but the sad reality is; it was never taken from them, they gave it away, relinquishing their parental rights in favour of other priorities in life. For some, this is the necessity to work for a living and then make the most of what little social life they have left. For others, it’s their amoral abuse of the welfare state that is funded by the hard workers in our society who often keep multiple jobs to make ends meet after a chunk is skimmed off in taxes and handed out to those whose only concern in life is how far their ‘job seeker’s allowance’ will stretch down the pub.

Meanwhile, the rest of us are paying to keep a roof over their heads, feed and educate their children for their introduction into society. But that’s another article.

Originally published in issue 4 of a Different Angle magazine.