Casa Bella’s Masquerade is a winner

Posted by Tony Marturano on February 27, 2011 in Casa Bella, Dinner Parties |No Comments

What an evening. The Masquerade was everything I expected and more; a colourful, funny and eccenctric time was had by all! 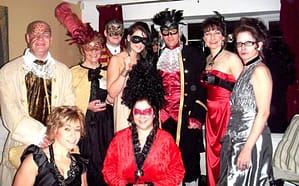 The evening started relatively well but the weather did not play ball, especially when I was trying to light some lanterns out on the decking. They’d been put out there the previous day and were water logged which meant that all the candles needed to be replaced. These lanterns look beautiful but they’re rather fiddly, especially for a little short ass like me! So I found myself battling with the elements, trying hard not to fall on my backside whilst trying not to get my wig caught on a tree branch! Oh, didn’t I mention that? I was suitably dressed as a nobleman of the era.

In the meantime, Francesca, donned in a custom tailored dressed, swished greetings to the arriving guests and shepherded them into the study for
drinks. Luckily, we kicked off this event with a home made punch from Alla Botega Italiana but really our own home recipe which I have to say was more
like Francesca’s science experiment but it taste delicious. 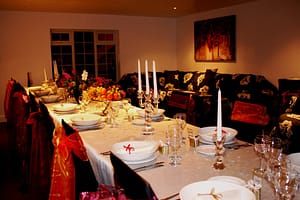 My sister is really hot on photographing each and every episode of her life so our guests must have truly felt like royalty as shutters snapped and flashes, well, flashed. Eventually, we led out guests away from the strobe lighting through into the dining room where if the “wows” are anything to go by, they were suitably impressed.

Meanwhile, I’m in the other room recovering from a mad dash candle lighting session. I had no idea I’d set up so many! Again, it’s one of those things where concept doesn’t necessarily follow practicality. Nonetheless, when I eventually got the room ablaze (not literally of course), the candles along with some timeless classical masterpieces set the ambience just nicely.

Unlike previous dinner parties, we tried to keep as close as we could to some of the dining traditions of the time. E.g. laying much of the food out on platters and allowing our guests to help themselves. This was somewhat alien to us but it is something we had agreed to do from the start.  Now, the dining experience may not have lasted as long as the previous event but it did take equally as long as guests were continuously coming and going from the dining room which meant we couldn’t get the main attraction of the evening underway. What was that? Oh, just a small talent show for which we were handing out Casa Bella custom made trophies.

In true Casa Bella fashion, we didn’t want our guests becoming complacent on the evening so, several weeks before tonight, I sent an email to everybody asking them to sing for their supper! Roughly translated as we wanted them to bring a talent to the evening, any talent, be it singing, drawing, even telling a joke, we wanted to suss out just how talented our friends are and it made for some of the most impressive and amusing parts of the evening.  Francesca and my talent was a well-rehearsed dance of the era courtesy of Mr Beverage’s Maggot (no, I’m not kidding you, it is a piece of music regularly featured in BBC period dramas). The twist was that I’d spliced ‘I like big butts’ by Sir Mix-alot into the middle of it which meant that we went from dancing a dainty minuet to jumping around on the spot and slapping our backsides!  Needless to say that the stark contrast of that against our costumes and the whole theme of the evening had many laughing.

Then it was time for each guest, in turn, to take centre stage and show us all what they were made of and I was really impressed and warmed by the effort many had made. Thanks guys!

The two trophies were handed out for best costume and best talent and they were well deserved.

For fans of Roman Holiday and the famous ‘Bocca Della Verita’, there was a mystery box equivalent with a series of objects that guests took in turns to guess throughout the evening.   Again, some pretty smart cookies at this masquerade!

Eventually, the evening rolled to a slow. I can’t remember exactly what time it was when guests started to leave.  I think it was around 02:00am. After a while, things turned into a bit of a blur. I, and I’m sure Francesca, were just so exhausted. It had been a very long build up and, as always, when the event is over, the adrenaline fades.

It was a good kind of exhausted. You know the one where you feel you’ve actually accomplished something, like being able to say “I made that”.  I felt that way tonight. I know Francesca has always been fascinated with Venetian Masquerade and, as her brother, I’m delighted to have been instrumental in bringing some of that eccentricity right into our home.

Feedback was very good but the following weeks will be a testament to that as we also receive some of the indirect feedback.  As always, questions turned towards the next event, this time during the meal! Easy people,  let’s get one event out of the way before we start contemplating the next.

Somebody also brought up the topic of money; “these events must be costing you a fortune”.  My answer to that was that they can , especially when you have a perfectionist at the helm; everything has to be the best it can be and that’s often pricey.

Perhaps, but the way I see it is that life is simply too short and if I have the opportunity to spend quality time with people that matter to me and it ultimately brings me joy then I shouldn’t hesitate because who knows what’s around the corner.

I humbly extend the same advice to you.