Posted by Tony Marturano on December 16, 2010 in Casa Bella, Dinner Parties |No Comments 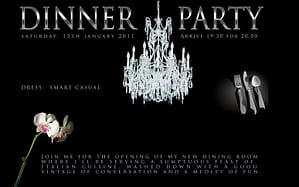 we’re still receiving feedback on the dining room grand opening that took place a few weeks ago. Some of this feedback is coming from people we don’t even know! Not sure exactly what has taken place but it seems that rumour mill has been working overtime. Our guests have talked to their aquaintances about the event and shown pictures to their friends who in turn have discussed it with their friends. The result is that we’ve had complete strangers telling us about our own event! How cool (and weird) is that?!  🙂

The only downside of course is that, at this rate, friends who I was unable to accommodate at the previous event are going to hear about the next  before I’ve  had the opportunity to  explain about the whole limited seating thing!  Aaaargh!    This in turn has prompted a review of our Masquerade guest list which has now promptly been increased to 16/18 sit down places.

In the meantime, I’ve had to schedule an interim dinner party (pretty much a replica of the previous) for my closest friends. This will take place in January 2011 closely followed by the Masquerade in February.

Meanwhile, one of my sister’s friends asked her if Casa Bella was to become a ‘pop up’ restaurant and if hosting dinner parties was our next business venture. I had to laugh. Especially when she asked if we were using our friends as test subjects before we launched our new business venture. The answer is no, it isn’t something we have thought about nor something we’d be interested in. At the moment, it’s still fun, I fear this would change as soon as we crossed the line from pleasure to business. Although the thought of charging per head does sound appealing. 😉

Needless to say, it’s going to be  busy few months around here!