The proudest night of my life. When was yours?

Okay, so maybe I was a bit ambitious to say I’d be back with you the day after the evolution event two weeks ago. Since then, there’s been a deluge of new deals, company name change tasks, sickness, a brush with trading standards, Christian Grey tat, oh and rain.

So, have you missed me?

Sure you have. I’ve certainly missed writing for you. I feel like I’ve been stuck at the bottom of an ocean and have only just managed to resurface.

Things have been made worse by the fact that I’ve had some kind of virus for the past week which has kindly inflicted hangover worthy headaches, sore throat, chills, night sweats and general insomnia, all that, and despite a massive dose of the usual meds, it insists that it still is not ready to part company.

The black tie event that took place on the 30th June 2012 and at which CGA’s rebrand as Prospettiva (Italian for Perspective) took place feels like it
actually took place months ago but I’m thrilled to report the night went perfectly and to schedule. This event was certainly one of the most important and memorable of my life, and one of which I am extremely proud. It felt like as was dubbed my wedding only I wasn’t getting married to a life partner but a business partner, and I cannot begin to describe to you just how honoured I felt to be standing in front of my family, my friends, colleagues and clients to deliver a 30 minute speech of a lifetime that talked about change, the beauty of change and how the successful company of which I am Managing Director and CEO has evolved from the small 2 man band to a leading provider of business software and cloud solutions. 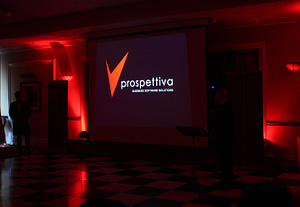 The official reveal (a film presentation designed by me) was projected onto a giant screen to a Hollywood movie trailer styled film score and received rapturous applause.  Throughout the evening and days later, I’ve continued to receive messages and cards of congratulations for a thoroughly enjoyable evening which featured a butterfly theme symbolising change.  Compliments ranged from the ambience set by corporate colour uplighters and orchid cylinder vase table decorations, through to the table side magician and the live band playing well known jazz tunes that, at one point, had 100% of the guests up and on the dance floor. This was further complimented by an interlude that featured a 30 man (and 1 woman) strong male voice choir (Huntingdon Male Voice Choir) who captivated guests with a 40 minute set of beautiful melodies. Their voices were truly angelic. Guests were also treated to a 3 course meal, an open bar, as well as goody bags featuring free cinema tickets, wine bottles and candy, as well as Prospettiva merchandise made up of pens, umbrellas and USB flash drives. Guests who chose to take advantage of the Prospettiva hospitality were also treated to an overnight stay at the hotel with Sunday breakfast also thrown in on us.  The evening was spectacular. The ladies looked beautiful and the men looked handsome. It was a perfect evening but then I expected it to be….

Are you starting to feel sick yet?

Yes? No? Because this type of stuff could really have you swinging either way; you could be the mushy kind of Brit who is a sucker for a success story and love everything warm, fluffy and just generally packed with goodness or you could be the more common variety ‘reserved’ (some would say cynical) Brit who just finds most sentimental and sycophantic stuff vomit inducing. Then again, you may not be a Brit at all and think; “what the hell’s he on about?”

I’m talking about what it means to be British and effusive, or not as the case may be.

There’s something about us Brits, we do enjoy a good success story but it kind of has to be on our terms. E.g. you can be average Joe, the underdog, the guy who comes from nothing has had a really tough life and maybe still has one  but who then signs up to a TV talent show, struggles to beat off the competition and then wins. This type of person can pretty much rely on the general public’s support right up to the bitter end as they vicariously live the drama, feel the struggle. In fact, they might even shed a tear after spending approximately £1 (considerably more if they didn’t call from a land line) to contribute to average Jo’s success by ringing in their vote. But then if he gets famous, starts to enjoy his newfound stardom and the money it brings, starts featuring in a few magazines, starts living it up a little with maybe a few rowdy nights here and there, maybe even a few everyday indiscretions that land him on the front page of a national rag then that same public support quite swiftly starts to wane.

It’s very much a case of ‘we will support you but you but you better stay in your box’. It’s almost a sense of ownership as the general public had a hand in making you and so they own you. You can have a bit of fun but start behaving like a real celebrity, forget you were actually one of us and you’re condemned to the fires of hell. There is some psychology to this; this person retains the support provided that they focus on their talent and continue to be someone who can be emulated and somebody with whom the general public can identify with but start to get some ‘airs and graces’, and, well, things turn ugly pretty sharpish.

We see this behaviour happening all the time in the press, who represent the embodiment of the general nation. All too often we witness them, like mythical Gods, making and breaking the careers of many. The press love nothing more but a story about average Joe that they know many will identify with and love being instrumental in the process as it gives them direct access to the story for all of its longevity. Yes, with one swoosh of their ink filled mast, they eagerly create the next star but as soon as that star starts to behave like one, perhaps linger a bit too long at that club, maybe have a few too many and maybe act (like most drunks) a bit of fool then they won’t hesitate to wield that same mast for sensationalised destruction. But make no mistake, it isn’t news; it’s reaping from the previous investment.

I made you. I can break you.

Similarly, in everyday life, most of us are happy to give credit where credit is due. E.g. let’s say somebody you know has a child and that their child did very well at the school exams. If the mood swung you, you’d congratulate this acquaintance on their child’s achievement. Indeed, if this person were vane (I mean) proud enough to publish it on Facebook you might even click the LIKE button, or, if you’re feeling super generous, you may even comment on it. But what if you found out about this child’s achievements via the following announcement, “well, I always knew my child was smart and these results only confirm what I already knew.”

Would you still feel inclined to congratulate them so freely?

On the other hand, if the line was delivered like this, “I was so excited today to discover that my baby has done really well at school. I’m so proud”.

How would you feel about congratulating them now?

There is a very thin line between pride and arrogance, confidence and vanity, appreciation and envy.   It seems that, as Brits, we’re not always that reserved at dishing out praise where it is due but it has to be on our terms. If somebody else is busy ‘singing their own praises’ then they don’t need us to validate it or certainly don’t appear to so why bother?

Life can be tough. Some things come easy to some but prove elusive to others. How exactly our cards will be dealt is unknown. What is known is that life is certainly a rollercoaster; one day you’re up and one day you’re down. Of course you should be proud of the achievements that you and your manage throughout life but there really is no need to parade them in front of others like the head of a hapless hunting victim.  You either would appreciate the feedback and the validation of those orbiting your life or you’re already too arrogant enough not to care, so if the latter then don’t bother wasting your time since most intelligent people aren’t interested in having your predetermination inflicted on them, they’d rather make up their own minds.

As for me, everything I wrote about the evolution event is true but it was edited for the purpose of this article. By edit, I mean I omitted all of the drama and some of the ‘challenges’ that I and the team were faced with when staging the event, like paying for specially imported flowers that arrived 3 days after the event, forcing me to make a last minute dash on the day to seek suitable replacements and thus changing the whole design of the event, or the fact that merchandisers decided to send just half of my order forcing me to abandon the goody bags that I had planned and instead source other items to complete the bags which were not branded but at least looked good, as well as the sound system failing minutes before I was due to give my speech, and so on.  I could go on but I think you get a flavour for what it was really like.

So, how do you like my story now that it isn’t as sickly as I originally described and that I and my trusty helpers had to work really hard, overcome adversity for the evening to turn out as successfully as it did?

Had I detailed more of these contrasts to my original sycophantic assessment of the evening, you may have viewed the paragraph in a different light, or you may have been unaffected either way.

Love it or hate it. Ultimately your reaction to this, or any other story of its kind, is what makes you, you.