Christmas; loved or loathed….how does it make you feel?

Posted by Tony Marturano on December 2, 2011 in writing |13 Comments

How many times has somebody asked you that? And how many times have you stopped to think about your answer and say what’s really on your mind? Most of us don’t, not unless we’re talking to a family member or friend and certainly not whilst in a long line at the checkout or at the beginning of a major business meeting since nobody expects a relative stranger to launch into a monologue about how their back is still giving them gyp and how their partner has run off with the next-door neighbour and taken the family pet. No, our stock response will often be  “Fine, thanks” but the reality is often different.

As Brits, we take issue with American’s use of “How ya’ doing?” and “Have a nice day” because these phrases appear artificial, insincere yet, despite this fact, we too are adopting this artificial familiarity. Indeed, “how are you?” is progressively becoming synonymous with “hello”. So with this in mind, let me ask you once again, ‘how are you’?

But before you answer that, take a few seconds; is everything absolutely fine in your life? If, after some soul searching, you are able to answer “yes” then congratulations, you are one of the few in the world living a truly blissful existence. That or you are in denial. 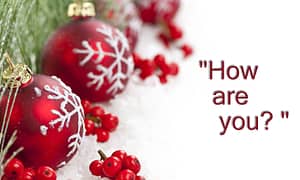 The simple truth is, most of us aren’t okay.  There’s often something weighing on our mind, whether it’s money (lack of it), a job (feeling unfulfilled or incompatible with a colleague), our children (their behaviour, their values, their future), a relationship (not working, over), or eternal loss (of somebody you love but whom you know you’ll never see again), we’re always carrying something like a surgically placed emotional backpack.

So what are we doing about this? What are you doing to make it better? Well, often nothing, it’s just life, but for some, approximately 6000 each year in the UK, It’s more than that or, more specifically, more than they can bare and, sadly, they choose what’s known as “the easy way out.”  The fallacy is that these tragic events are most commonly ‘triggered’ during the festive season; major events that call for the gathering and rejoicing of one and all which accentuate the feeling of loneliness and loss.  However, Whilst the festive season is undoubtedly a depressing time for some and is responsible for an increase in telephone calls to national support groups, it is not the most common time of year for suicide. This is actually in the spring. The reason is unknown but experts believe it’s something to do with the warmer weather that ‘triggers’ something in humans.

So, what’s with all this talk of suicide? Please forgive my temporary flippancy but if, like me, you have a large family, you’ll understand why sometimes this thought is not so alien. Christmas is the time of year when, like it or not, families are thrust together, often more by duty than by choice which means the danger of a flashpoint and subsequent meltdown is high. Furthermore, “Christmas isn’t like it used to be.” At least the flash poll I conducted. Most of those I actually spoke to (4 out of 5) just groaned as if I’d asked them to drop to the ground and give me twenty press-ups. Out of the 20 people who voted online, 9 said that they weren’t looking forward to it as it “isn’t what it used to be”. Most of these were women. 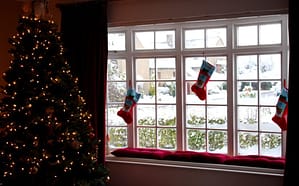 Why are  the majority of people not looking forward to the season of goodwill? Well, could it be because Christmas happens at the end of a year and reminds us all of our mortality; one year older? Or is it simply that it’s an unusually stressful time for many. It’s a time where finances  tend to be stretched to the limit,  whether that be due to gift hunting or simply amassing the stock pile of food which, for some obscure reason,  we all feel we have to hoard as if a nuclear winter were around the corner. This is somewhat ironic given our age of 24 hour shopping where one’s often stretched to find somewhere closed on Christmas day than open. Yet, most (and yes, especially the women) are going to fret over whether or not there’s enough food to go round as well as worry about family politics, hence the crucial pre event briefing. Not unlike major security details, key family members are ‘briefed’ (often by mothers) to avoid certain topics, “Don’t mention anything about cousin Jack’s run in with the police or Emily’s split from her boyfriend because she still gets upset about it, yes It’s been a year, yes she’d only known him one night whilst on holiday but just don’t mention anything!” This sense of diplomacy, dormant for the rest of the year, makes an impressive emergence at family gatherings, one to rival even the most hardened of politicians, as major negotiations are held to circumnavigate the ubiquitous row about where to spend Christmas and Boxing Day. This prompts an in depth analysis, worthy of any pie chart, about which day, hour, minute was spent where last year. And thus, hours and a few arguments later, deals are struck, plans are made and grudges set aside (albeit temporarily).

So the big day arrives, ‘the event’ where children can’t sleep for the excitement and adults can’t sleep because they left the turkey in the slow cooker over night. Family members are bullied into lending a hand, table places are set, decorations are checked for symmetrical alignment, toilets are sterilised, rooms and spouses are tidied, and furniture is given the once over, all minutes before the doorbell chimes. Months of shopping, scrimping, saving, and hours of decorating, cleaning, peeling, whisking, all for this moment. So, if you successfully manage to get everybody to the table, the meal commences with traditional gluttony during which you thank God that you made it this far without any major disasters. Now, the only challenge remaining is the warzone that is the kitchen as well as where to put the stockpile of food that you didn’t use but is enough to feed a whole third world village. And it’s as lazier relatives slouch in front of the TV to critique the Queen’s speech or sleep off the gorging ritual that it hits you; what on earth was all the rushing, plotting, planning, stressing and yelling about? It’s one day of the year yet it rivals the most sophisticated of wedding ceremonies and, as such, had you on the verge of tears more times that you’d care to admit. And it all starts off in September with a barrage of advertising that, like a pressure cooker, gradually builds up out of all proportions and expectations as you strive to make it the most memorable  event ever. In reality, it’s just another day, only with more people to cook and wait on, featuring the obligatory poor man’s version of pomp, ceremony and traditions. But now, like the calm after the storm, it all seems a bit of an anticlimax, one of those really sexy dreams where everything is going well until the object of your desire turns out to be somebody you know, don’t particularly like, and now won’t look at the same way ever again.  Many forget that this special day is actually the celebration of somebody’s birthday yet, in many households, this is a minor technicality lost in the master plan but is ultimately the equivalent of throwing a birthday party without the birthday boy.

So what about New Years? Well, unlike Christmas (the end of the year) it marks the beginning of a new chapter in our lives, a blank canvas, and the chance to consign all the ills of yesteryear to the past and start anew. Like clearing an old debt, we’re energised, full of resolutions, ready to take our future by the horns, kick the habit (whatever that may be), start the diet and or hit the gym with the view to being slimmer and sexier by the summer.  Right? Well, kind of, that is until we reach the middle of January, the 24th to be precise.  What? you don’t know about the 24th?  It’s been officially labelled as the most depressing day of the year. Yes, all according to a scientific verifiable formula consisting of weather, credit card debt, time elapsed since the Christmas ‘festivities’, failed resolutions, motivational bankruptcy, and a desperate need to have something to look forward to besides the spring bank holiday (hence why holiday adverts run days after Boxing Day). Furthermore, nights are short as well as tempers; insurance companies blame ‘winters driver’s disorder’ for an increase in road accidents in January. Employers are also encouraged to be ‘nicer’ to their staff in January by offering free hot drinks and throwing mini office parties.

Wow, all that and a recession that’s still lingering like a bad smell! We’re doomed! There appear to be many reasons why both the beginning and the end of the year makes us downright gloomy. Many reasons why the next time somebody asks “how are you?” we’ll assail them with an emotional outpour.

But hold on, what about the middle of the year? We haven’t talked about that. That’s because we don’t need to. The reality is that our experiences aren’t the results of some sadistic game played by mythical gods, it’s simply life. Like shares; we’re sometimes up and sometimes down.  It’s how we deal with our ups and downs that makes the difference. For most of us, the nostalgic ‘Norman Rockwell’ warm and fuzzy image of coming home for the holidays is just that; an artistic impression. Life isn’t always easy, of course it isn’t, if it were we wouldn’t be able to appreciate the things that really matter the most. Family, friends, life partners often equal unreserved love. This isn’t something that you’ll find in a Christmas cracker but it’s a precious gem to be appreciated and admired maybe not all the time but at least on special occasions.  Our life, like some parents, may not be perfect but it’s the only one we have, and the trick is to make most of it because you never know what tomorrow may bring.